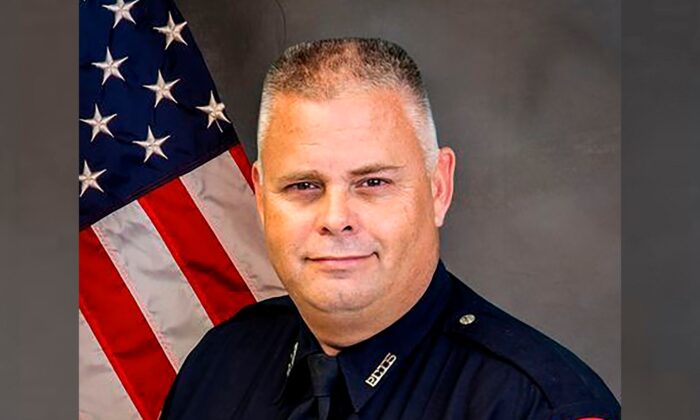 This undated photo shows Constable Cpl. Charles Galloway, who was fatally shot during a traffic stop in Houston, Texas, on Jan. 23, 2022. (Harris County Constable Precinct 5 via AP)
Crime and Incidents

HOUSTON—A 51-year-old man who had been on the run after being accused of fatally shooting a Houston-area deputy during a traffic stop this past weekend has been arrested in Mexico, authorities announced Wednesday.

“We are working with our law enforcement partners to begin the process of returning Rosales to Harris County,” Houston police said.

Rosales was found in Ciudad Acuña, Mexico, located across the U.S.-Mexico border from Del Rio, Texas, according to the U.S. Marshals Service. A reward of $60,000 had been offered for information leading to his arrest.

Harris County Precinct 5 Cpl. Charles Galloway, 47, was shot and killed around 12:45 a.m. on Sunday after pulling over a Toyota Avalon.

Authorities allege Rosales got out of his vehicle, fired multiple shots at Galloway with some type of assault rifle and then got back in his car and drove away. Harris County Precinct 5 Constable Ted Heap said Galloway had no time to respond or defend himself.

Prosecutors have filed a charge of capital murder against Rosales.

Authorities said that Rosales’ common law wife, Reina Marquez, 40, and her brother, Henri Marquez, 42, have each been charged with tampering with evidence in connection with the case.

Both are accused of tampering with Rosales’ car in an attempt to cover up his involvement in Galloway’s shooting death, according to Finner and court records.

Court records don’t list an attorney for Reina Marquez or her brother.

Galloway had been with the constable’s office for about 12 and a half years, Heap said. The deputy mentored and trained numerous younger officers, who Heap said were “broken up” over the death.

Galloway is survived by a daughter and a sister, Heap said.