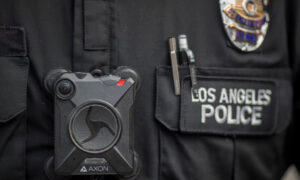 A man and his son in Texas who have gone out to rescue animals that have been imperiled by the waters of Harvey are getting praise for their rescue efforts.

Chase Ward, whose Facebook profile says he lives about 45 miles northeast of Houston in Clevelend, Texas, posted videos of him and his son Rowdy.

One video shows Rowdy busting open the fence on a pen where a young horse is trapped inside with neck high water.

Rowdy is able to lasso the horse before he lets it out, and then apparently leads the horse to higher ground. The caption on the video says “all animals were saved.”

Another video shows a man who was apparently flooded out of his house wading through knee-deep water with a dog swimming behind him.

The man is carrying a black garbage bag, and when he gets close to the camera, he hands off the bag and picks up the dog. Chase says he will give him a ride out on his four-wheeler, and the last shot shows the man sitting on front of the four-wheeler with the dog in his lap.

Another video shows them attempting to rescue several horses and a pony from what looks like a flooded paddock. Chase says he will try to rope them and lead them to higher ground, but then the video ends and there is no mention as to what happened.

A Facebook message to Chase was not immediately returned.

People have posted thousands of comments on the videos thanking Chase and Rowdy for their heroism and compassion for the animals. The comments are from all over the country Washington, Michigan, and Idaho—and some are in foreign languages like Spanish, German, and Russian.

“You are A Hero, prayers from Sweden,” Facebook user Camilla Nilsson wrote.

“Thank you so much for helping these beautiful animals. You are amazing!!!!” user Christal Cherry wrote.

Harvey has been downgraded to a tropical storm and has already flooded much of southeast Texas with some places getting as much as 40 inches of water. The National Weather Service predicts another seven to 13 inches of rain in southeast Texas and southwest Louisiana as early as Tuesday afternoon.