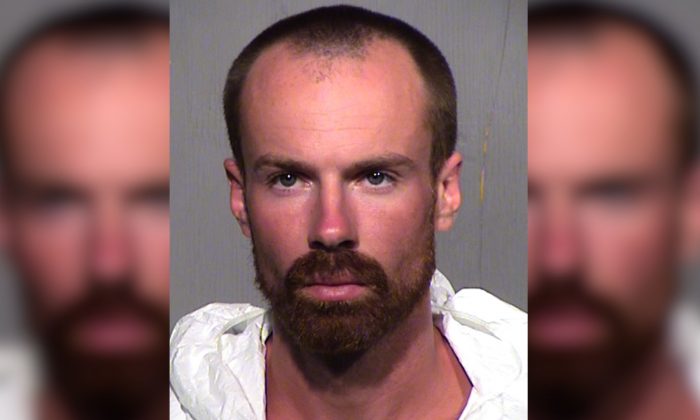 An Arizona man who is accused of stabbing a 17-year-old to death on July 4, told police he did it because he felt “unsafe” after hearing the teen’s rap music.

Michael Paul Adams, 27, was accused of slashing the throat of 17-year-old Elijah Al-Amin at a convenience store in Peoria just before 2 a.m. He has since been charged with the first-degree premeditated murder of the boy.

The 27-year-old lunged at the boy’s throat, slitting it with a pocketknife, and stabbed him repeatedly in the back after he heard him playing rap music in his car, deputies said.

The mother of a teen stabbed to death in a Circle K speaks exclusively to @FOX10Phoenix. Serina Rides says she doesn’t want any mom to feel her pain. Police say Michael Adams murdered Elijah Al-Amin bc he felt threatened by rap music he listened to. pic.twitter.com/kD0HvRjZwO

Al-Amin then ran out of the convenience store to escape his attacker. He collapsed and was rushed to a local hospital, where he sadly succumbed to his injuries, according to police records.

A probable cause statement obtained by BuzzFeed News states that the attacker targeted the teen because of how his music choice made him feel.

He told police he himself had been attacked in the past by people “…who listen to rap music,” so he decided to be “proactive rather than reactive,” the outlet reported.

He claimed he was threatened by the genre of music Al-Amin was playing, not the boy himself, reported AZ Central.

Court papers state Adams identified his previous attackers as black, Latino, and Native American, and that he believes individuals who listen to rap music are “a threat to him and the community.”

Officers arrested Adams on 67th Avenue near the Circle K after he was found with blood on his clothing and body, and later admitted to his involvement in Al-Amin’s stabbing. He was charged with first-degree murder and is being held at Fourth Avenue Jail in lieu of $1 million bond.

Update: Family friends identify the 17 yo victim as Elijah Al-Amin of Glendale. He was killed at this Peoria Circle K, a random victim of violence. 27 yo Michael Paul Adams confessed to the murder, told police he did it bc the teen was playing rap music in his car #Fox10phoenix pic.twitter.com/a10tNhbx1u

Adams was homeless when he was released, his defense attorney Jacie Cotterell told AZ Central, who said he was “set up for failure” as he didn’t have access to the necessary mental health resources.

She argued the attacker needed to see a counselor who deals with mental health.

“He was on the street,” Cotterell said, explaining his family members weren’t aware of his whereabouts following his release last week.

“To be specific, he was given resources, he wasn’t given means to get to those resources.”

However, in a statement a spokesman for the Arizona Department of Corrections, Bill Lamoreaux, said Adams was not designated “seriously mentally ill.”

A man said he stabbed and killed a 17-year-old because the boy was playing rap music, which makes him feel “unsafe.”

Elijah Al-Amin would have been 18 in two weeks. He was saving up for a car.

Before he was released, he was allegedly give contact details for community services, including “continuing care, housing, welfare,” said Arizona Department of Corrections spokesman Andrew Wilder.

“The tragic death is terrible, and Mr. Adams will have to answer for his alleged actions,” Wilder continued.

“There’s no excuse for this,” the teen’s devastated mother, Serina Rides told Fox 10.

“But I have to stay focused because I know that’s what he would want and to make sure justice is served for him.”

She believes Adams and his defense attorney are “hiding behind mental illness” as a reason behind the murder, which she believes was racially motivated.

Adams has an extensive criminal history, including charges of assault with a weapon and aggravated assault of a correctional employee, marijuana violation, theft, disorderly conduct, and shoplifting, according to Maricopa County Superior Court records, AZ Central reported.

Adams is scheduled to appear in court for a preliminary hearing on July 15.