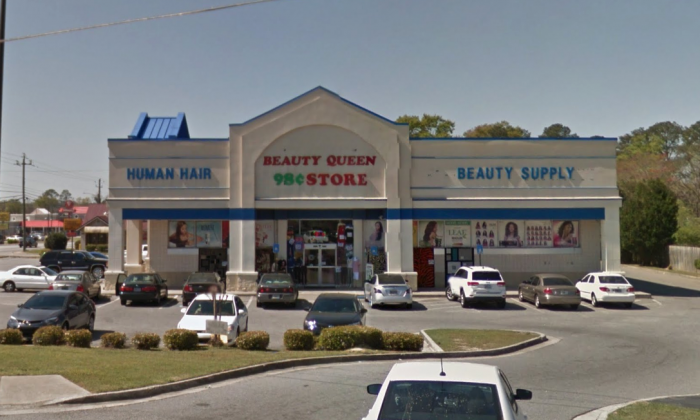 Beauty Queen 98 Cents Store, in Macon, Ga., where a blood-soaked man pulled up after being shot in his car on March 6, 2018. (Screenshot via Google Maps)
Crime and Incidents

A man who survived being shot in the face drove himself to a nearby beauty store in Georgia.

He was reported to have been shot in his car about a mile away around 5 p.m. on Tuesday, March 6, according to the Bibb County Sheriff’s Office.

Fortunately, the bullet that hit him only grazed him, just above the left eye, said the county sheriff’s office in a statement.

Gay pulled up at the Beauty Queen 98¢ Store in blood-soaked clothes, according to witnesses, reported the Macon Telegraph.

Breaking: at Beauty Queen 98 cent story on Mercer Universe Drive where a man who was shot in his car was taken to the hospital. This is a developing story check with @WGXAnews for updates pic.twitter.com/0vCutW7BSh

He then called 911, according to the sheriff’s office.

“Gay was transported to the Navicent Health Medical Center, where he is listed in stable condition,” the sheriff’s office said in a statement.

“It was stated that a Green Toyota Camry, driven by 23-year-old Steven Lamar Gay, of Macon, was on Sharon Drive when an unknown suspect in a black car started shooting at him. It was stated the suspect fired several shots at Gay.”

“No one else was injured in the incident. No information is available on the suspect at this time,” noted the sheriff’s office.

Investigators marked at least eight shell casings on the street about a mile from the store, reported the Telegraph, and deputies appeared to be searching for something as they circled around a brick house.

“Are you trying to tell me somebody got shot at eight times over here and I didn’t hear a thing,” a neighbor told a Telegraph reporter, saying that she had been home all day. “My God. … That’s scary.”

Broken shards of glass were strewn across the street, reported the newspaper.
Recommended Video: