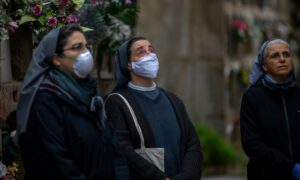 The Latest Updates on CCP Virus Cases Around the World
0 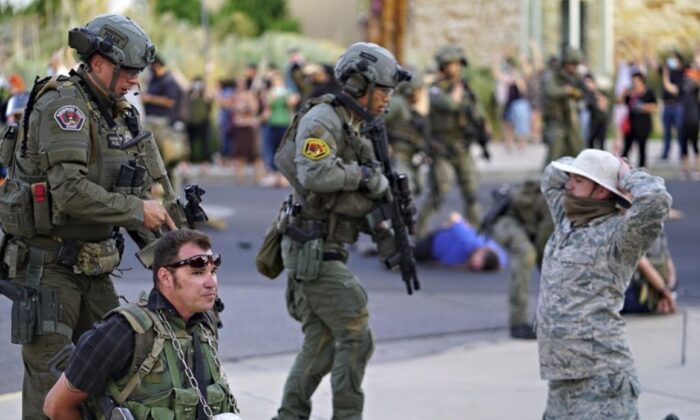 Albuquerque police detain members of the New Mexico Civil Guard, an armed civilian group, following the shooting of a man during a protest over a statue of Spanish conquerer Juan de Oñate in Albuquerque, N.M. on June 15, 2020. (Adolphe Pierre-Louis/The Albuquerque Journal via AP)
US News

Man Shot During Protest Over Statue in Albuquerque

A man was shot on Monday evening in Albuquerque, New Mexico, as protesters attempted to tear down a bronze statue of a Spanish conquistador near the Albuquerque Museum, said police.

Albuquerque police spokesman Gilbert Gallegos told The Associated Press that the shot victim was hospitalized in critical but stable condition as of Monday evening. The identity of the victim was not disclosed.

Gov. Michelle Lujan Grisham and other officials condemned the shooting and violence on Monday evening.

“Although we are still learning more about the situation, I am horrified and disgusted beyond words by the reports of violence at a protest Monday night in Albuquerque,” Lujan Grisham said late Monday in a statement on the governor’s website. “The heavily armed individuals who flaunted themselves at the protest, calling themselves a ‘civil guard,’ were there for one reason: To menace protesters, to present an unsanctioned show of unregulated force. To menace the people of New Mexico with weaponry—with an implicit threat of violence—is on its face unacceptable; that violence did indeed occur is unspeakable.”

Message from APD Chief Michael Geier: “We are receiving reports about vigilante groups possibly instigating this violence. If this is true will be holding them accountable to the fullest extent of the law, including federal hate group designation and prosecution.”

The violent unrest prompted the mayor, Tim Keller, to announce that the city will remove the statue of conquistador Juan de Onate.

“In order to contain the public safety risk, the City will be removing the statue until the appropriate civic institutions can determine next steps,” he wrote on Twitter. “Our hearts go out the victim, his family and witnesses whose lives were needlessly threatened tonight. This sculpture has now become an urgent matter of public safety.”

The Albuquerque Police Department also confirmed Tuesday that 31-year-old Stephen Ray Baca was arrested in connection with the incident. He was taken to the Metropolitan Detention Center on aggravated battery charges, according to KRQE.

The Albuquerque Police Department has not responded to a request for comment.

Police Chief Michael Geier said in a statement that the department has been “receiving reports about vigilante groups possibly instigating this violence.”

“If this is true will be holding them accountable to the fullest extent of the law, including federal hate group designation and prosecution,” Geier wrote.