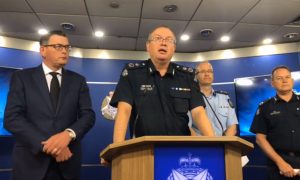 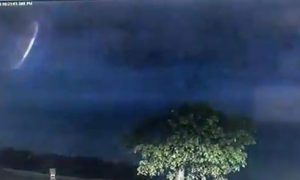 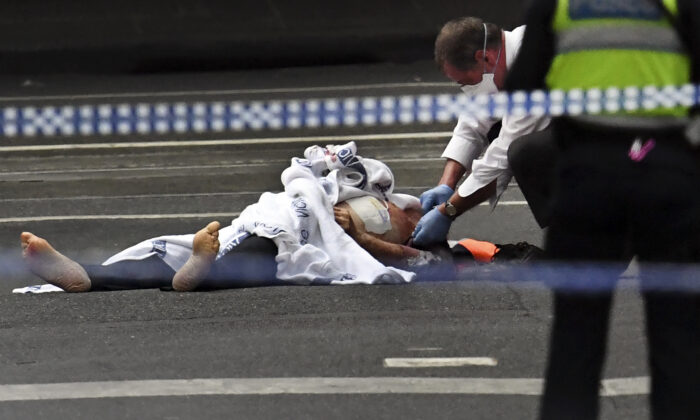 A police officer inspects a body at the crime scene following a stabbing incident in Melbourne on November 9, 2018. (William WEST / AFP)
Australia

A man has been shot dead by police after five people were stabbed at a shopping centre in Western Australia’s Pilbara region.

Police confirmed the man was shot by officers responding to an incident at South Hedland Square on May 1.

Port Hedland Commissioner Fred Riebeling says one of the victims is a council employee who works at a local theatre.

“If there’s five or half a dozen people injured, half the town will probably know someone involved.”

It’s understood one of the victims whose condition is more serious was stabbed in the neck.

A shop owner, known only as George, said the Taser seemed to have no effect on the man.

“This guy pushed a police lady against the window and then she fell over,” he told 6PR radio.

“The cops tried to tell him to stop. He wouldn’t stop.

“They tasered him four or five times. Nothing happened. It didn’t have any effect whatsoever on him.”

A St John Ambulance spokeswoman confirmed multiple people were treated at the scene before being taken to hospital.

WA Police said in a statement the circumstances surrounding how people were injured would be investigated.

“As per normal protocols, Major Crime Division and Professional Standards Division will investigate the circumstances surrounding the police shooting,” the statement said.

“There is no ongoing concern regarding public safety in South Hedland.”

WA Police Union president Harry Arnott said a team had been deployed to assist members involved in the incident and their colleagues.

“Our information indicates our members acted to protect the community and themselves, and without their intervention this incident would be significantly more tragic for the Hedland community,” he said in a statement.

“This incident again highlights the unique and dangerous job that police officers do.”