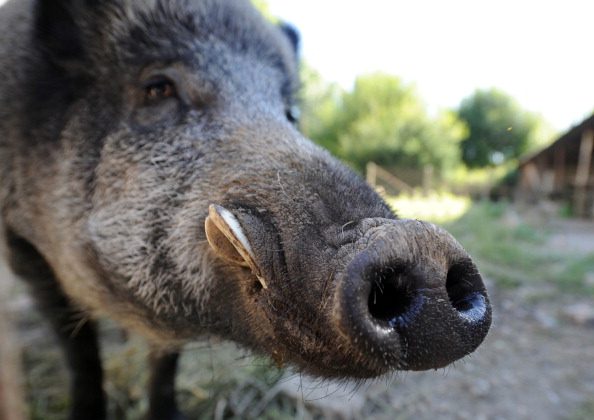 A Texas man shot a 416-pound boar that he found ripping up his backyard and terrorizing the makeshift deer sanctuary he has on his land.

Joe Clowers, of Union Grove, Texas, said he shot the boar with an AR-15 semi-automatic rifle. He was fed up with the boar preying on his fawns for the last five years.

“My property lays between some populated areas and I try to maintain an environment like a sanctuary or nursery for the deer to raise fawns,” said Clowers to the Houston Chronicle.

Clowers will turn the giant hog into a trophy that he will hang at home. The meat was left out too long to be eaten.

“He was the big daddy,” Clowers said. “I called him the bush beast.”

Feral pigs are a serious nuisance in the United States. They are considered an invasive species, according to the United States Department of Agriculture. Their population has exploded since the 1980s, and Texas has the largest number of them, at four million wild hogs. The state has struggled with ways to control them. They are very difficult to hunt since they are nocturnal, with an excellent sense of smell and hearing.

The New York Times reported that wild hogs cause about $52 million a year in damage through activities like consuming crops, destroying fences, eating young livestock, and digging up buried utility lines. They can also carry diseases that impact cattle and domesticated pigs.

There has been debate about how to control the population. Some have suggested poisoning them, but opponents have argued that the poisons will do more harm than good. Operations that make money off wild boar meat will be in danger. Hunters and meat processors can’t deal with pigs that have been poisoned.

The feral pigs plaguing Texas and other states are the progeny of domesticated pigs that were let loose in the wild or a cross between wild hogs brought in from Europe that bred with domesticated feral pigs in the United States, according to the Houston Chronicle.