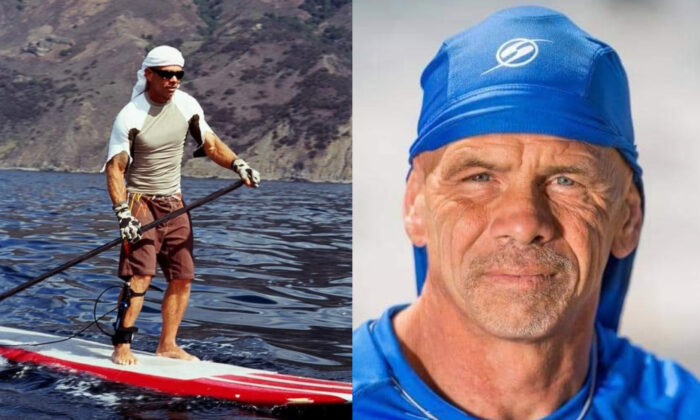 Tom Jones has been called a lot of things in his life, but this one took the cake.

Jones, 37 years old at the time, was about to embark on an extreme athletic endurance feat—run the length of a marathon (26.2 miles) every day for 120 consecutive days, starting in Huntington Beach, California, and arriving in New York City.

And on Day 121, Jones would run in the New York City Marathon.

The company that was sponsoring Jones’s trek—paying for the support staff that would feed him, apply physical therapy, and provide the motor home in which he would sleep every night—was starting to get cold feet.

What if he didn’t make it?

“They put up close to $250,000,” said Jones, now 58. “They hired an attorney that convinced them that there was an issue, that if I couldn’t make it, it would destroy their brand.”

So the company spent thousands of dollars to have Jones tested, poked, and prodded by doctors and trainers. And their findings?

“We all got together in a conference room, and the owner of the company looks at the doctor with the white coat on and says, ‘Well, what did you determine?’” Jones recalled.

“Can he do this? Or is it physically, humanly impossible? And the doctor says, well, he could be the bumblebee.

“And I lean over to my attorney; what did he say? He tells me the bumblebee is not supposed to be able to fly, but it flies anyway. Aerodynamically, it’s not supposed to work if you did the math, but the damn thing flies. It defies all the odds, and it does it anyway. That’s what I do.”

Jones, who stands 5-foot-7 and weighs 150 pounds, did, in fact, accomplish the feat, running 26.2 miles every day for 120 consecutive days before running in the New York City Marathon and finishing in a time of 4:04.

But the trip, which took place in the summer of 2000, wasn’t about the running.

Along the way, Jones would find time to speak at homes for abused and neglected children. It was the reason he embarked on such a journey; he felt it was his responsibility because he was abused as a child himself.

He made it his mission in life to engage in ridiculous, extreme endurance activities to draw attention to himself. Once he had an audience and would be asked why he would engage in such seemingly impossible attempts, it would give him the opportunity to raise awareness and money for causes he felt passionate about.

His journey, though, has been anything but smooth.

Jones was abused by his parents and, at the age of 12, was placed into a home for orphaned and abused children. But the home was worse—he says he was sexually molested until he eventually ran away at the age of 17.

He joined the Marine Corps and was based in South Carolina, where he began working out at a karate school owned by Chuck Norris, the legendary martial artist, and actor who would make an indelible impression on Jones.

After his time in the Marines, Jones moved to Huntington Beach, where he found another gym owned by Norris. He ultimately met Norris himself and began working for him and even sparring with him on occasion. It led to a successful mixed martial arts career during which he became a Muay Thai kickboxing champion, winning two world titles and four North American titles.

Norris’s biggest impact on Jones, however, wasn’t inside the ring.

Jones’s mixed martial arts career led him to another influential meeting, this one with an owner of a computer memory vending company, who hired Jones as a bodyguard and personal trainer.

The owner had a sales staff of more than 100 people, so he would hire motivational speakers to inspire his staff. One of those was former legendary college football coach Lou Holtz.

“Lou Holtz was about getting outside of yourself and doing something for somebody else,” Jones said. “Another one was (former Lakers coach) Pat Riley. They all had certain messages that they drove and I was at a point where I needed direction. So I decided I’m going to lend my athletic ability to something worthwhile and I’m going to prove I’m not just a fighter.”

Jones was on the road running one day, training for a fight, when he figured it out.

“That’s when the epiphany happened,” he said. “What am I going to do? I can’t go beat the crap out of somebody, because that’s what I did for a living. Then, it hit me. I’ll run a super-long distance, but I’ll make it absurd to where people will be like, why are you doing this? Now that I have your 15 seconds of attention, let’s see if I can squeeze a little bit of a point across.”

His first “absurd” feat was running from Oregon to Mexico in 1998, the length of California. It took three months, as Jones took the time along the way to visit homes for abused children to give them purpose and hope.

The Huntington Beach-to-New York journey was next, running more than 3,000 miles across the country. There were times he questioned whether or not he would make it.

“We’re all the sum of our experiences in life,” he said. “That’s what we are and who we are. So the children’s home was a five-star nightmare. I can’t tell you how many times I was on the side of the road crying, my feet bleeding, and all this other stuff, and I was done emotionally, physically, spiritually, the whole nine yards.

“But I could always say, this isn’t as bad as the home. Not having that experience wouldn’t make me as strong as I am today, even though nobody should have to go through that experience. It’s all about taking lemons and making lemonade.”

After such a harrowing and challenging experience, Jones decided he needed to do something that was a little more fun. So, he hired a coach to help him learn how to surf. The coach wanted Jones to build up his paddling strength, so he had Jones paddling on a surfboard in the Naples canals in Long Beach.

Jones found himself paddling through big floating piles of plastic and trash, and upon further investigation, he discovered the issue was significant. He learned about The Great Pacific Garbage Patch, which today is 1.6 million square kilometers (about 617,800 square miles) in size, consisting of plastic and trash coagulated into one giant mass.

Jones’ next mission was to bring awareness to the issue, so, of course, he had to come up with something big. He had run the length of California already, so why not paddle the same route along the coast?

Initially, the idea was to paddle while prone, but one day, while looking through a magazine, he saw a picture of surfer and fitness entrepreneur Laird Hamilton on a stand-up paddleboard.

Jones was able to arrange a meeting with Hamilton, who helped Jones learn to paddle. In 2007, Jones paddled from the Oregon–California border to the California–Mexico border, setting a world record, several great white shark sightings notwithstanding.

He followed that by breaking his own world record in long-distance paddling, going along the East Coast of the U.S. from Key West, Florida, to New York City in 2010.

“The ‘why’ has to be super strong. Because when it gets really bad, everybody wants to say this was a bad idea. But for me, having my ‘why” strong enough was really the driver that kept me going in times I wanted to quit and give up. If my ‘why’ is strong, the ‘how’ is something I’ll figure out along the way. And that’s been the way of it.”

Since then, Jones has learned that finding sponsors to fund such endeavors has been as difficult as the endurance event itself. So he pulled back from the extreme events for the time being and opened up his own gym in Orange County, only to eventually lose the business because of COVID.

That has brought him to his next challenge—running 26.2 miles in the morning and following it up with 100 miles on a hydrofoil board (a surfboard with a hydrofoil that extends below the board into the water) on Lake Powell in Utah, tentatively scheduled for next March or April.

He has partnered with Balance of Nature, a nutritional supplement company, which features Jones in a national television advertisement. Balance of Nature and Jones want to bring attention to United We Pledge (unitedwepledge.org), which according to its website, is “a private, nonprofit, nonpartisan, nondenominational foundation established to celebrate our shared responsibility and allegiance to the traditional American values of freedom, family, and faith and our duty to be constitutional, law-abiding citizens.”

By then, Jones —whose website is quitproof.com—will be 59 years old. But his determination is as strong as ever.

“For me, the harder it gets, the more comfortable I am, because that’s what I know. I know suffering,” Jones said. “I had to get used to smooth sailing. That was really uncomfortable because it was so foreign to me. And I would self-sabotage just to get back into that position. Even today, I catch myself doing it … it’s OK, to be OK.”