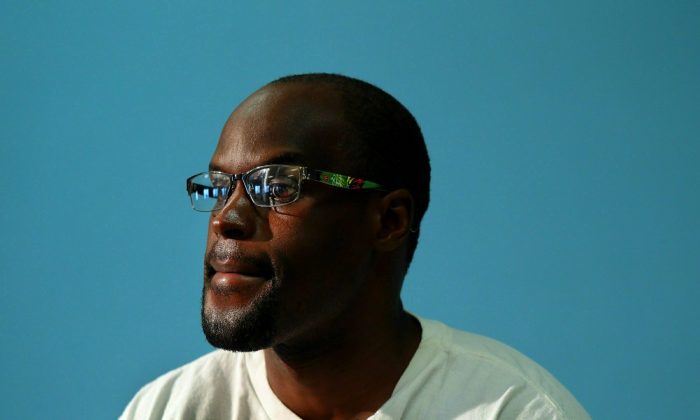 In this Thursday, July 10, 2014 photo, Bobby Bostic poses for a portrait in the visitation room at the Crossroads Correctional Center in Cameron, Mo., where he has served 23 years of a 241-year sentence for a 1995 robbery. (Robert Cohen/St. Louis Post-Dispatch via AP)
US News

Man Sentenced to Minimum of 112 Years as Teen Gets Parole

A man who was effectively sentenced to life in a Missouri prison for a robbery he committed as a teenager in St. Louis has been granted parole, years after the judge who sentenced him had a change of heart.

A state parole board granted parole to 42-year-old Bobby Bostic on Monday, and he will be released from prison late next year, according to the American Civil Liberties Union of Missouri and the Missouri Department of Corrections.

Bostic was 16 in December 1995 when he and another teen robbed at gunpoint a group of people who were delivering Christmas presents to a needy family. Prosecutors said Bostic fired a shot that grazed one victim, and that he and the other teen then carjacked and robbed a woman before releasing her.

Then-Circuit Judge Evelyn Baker believed at the time that rehabilitation for the teen was unlikely and sentenced Bostic on 18 counts for a total of 241 years to be served one after the other, meaning he wouldn’t be eligible for parole until he was 112. Her intent, the judge said at the time of sentencing, was that Bostic would “die in the Department of Corrections.”

Bostic for a while found hope in a 2010 U.S. Supreme Court ruling that outlawed life sentences for people under 18 for non-homicide crimes. The Supreme Court, however, declined to hear his case in 2019.

But Bostic got support from an unlikely source—the judge who had sentenced him. Baker, then retired, came to regret the sentence and in 2018 called for throwing it out, saying it was grossly unfair.

“What I learned too late is that young people’s brains are not static; they are in the process of maturing,” she wrote in an essay published by The Washington Post.

When the U.S. Supreme Court denied his case, the ACLU worked with the Missouri Legislature to pass a law based on Bostic’s case that allows teens imprisoned essentially for life for crimes other than murder to get a parole board review after 15 years.

The Missouri Department of Corrections on Tuesday confirmed Bostic is set to be released from prison Nov. 9. Until then, the department can offer Bostic a variety of programs, including job readiness classes and family reunification programs, department spokeswoman Karen Pojmann said.

“We can connect him to various re-entry programs to help ensure his success in society,” Pojmann said.