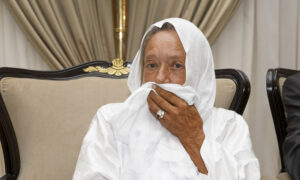 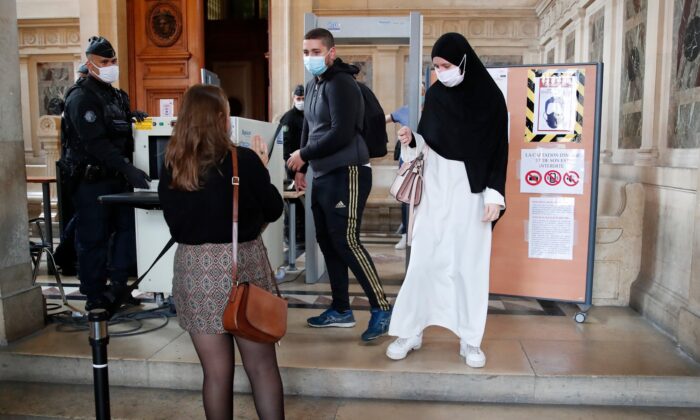 People are being checked before the trial of Sidi Ahmed Ghlam in Lyon, France, on Oct. 5, 2020. (Francois Mori/AP Photo)
Europe

LYON, France—A Paris criminal court sentenced a 29-year-old Algerian man Thursday to life in prison for killing a woman and trying to bomb a church near the French capital in a failed 2015 attack that investigators said was plotted by the ISIS terrorist group in Syria.

The court imposed the sentence after a jury convicted Sidi Ahmed Ghlam on charges of murder and attempted terrorist murder. The life sentence allows no chance for parole for at least 22 years.

Ghlam testified at his trial that at the time of the alleged crimes he had “embraced” ISIS ideology. He expressed regret over choosing that path, but denied killing the woman outside the church in the Paris suburb of Villejuif. He was arrested after shooting himself in the leg and calling an ambulance.

Ghlam’s sponsors in Syria were believed to be linked to major deadly attacks in France that year, including one at a kosher supermarket in January and the almost simultaneous attacks on the Bataclan concert hall, Paris cafes, and the national stadium on Nov. 13, 2015.

France has faced three more Islamic extremist attacks in recent weeks, and is again on high alert for acts of terrorism.

Ghlam’s lawyer, Jean-Hubert Portejoie, pledged to appeal the verdict, saying the jury “ruled on a rush of emotion, and under the pressure of public opinion, but not based on law.”

The defendant was on the radar of Algerian and French authorities for his proximity to ISIS operatives before the failed April 2015 bombing plot at the center of his conviction.

He testified about his interactions with the operatives, but he denied killing fitness instructor Aurélie Chatelain outside the church, blaming a mysterious accomplice who was never found. Ghlam’s DNA was found in Chatelain’s car.

He said he intentionally shot himself in the leg because he had second thoughts about the attack and didn’t want to suffer reprisals from his ISIS backers. Investigators said Ghlam had to give up attacking the church after accidentally shooting himself while trying to put his weapon back in his belt.

Seven other defendants found to have helped him in the attack were sentenced to between three and 30 years in prison.

The Paris court also convicted in absentia two operatives who were accused of orchestrating the attack, Abdelnasser Benyoucef and Samir Nouad, and sentenced them to life in prison. They are believed to have died in suicide attacks in Syria.

The trial of people accused of involvement in those attacks is being held this fall. Another French terrorist trial is opening later this month, involving an attempted ISIS attack on a high-speed Amsterdam-to-Paris train. Three American passengers thwarted the planned attack.