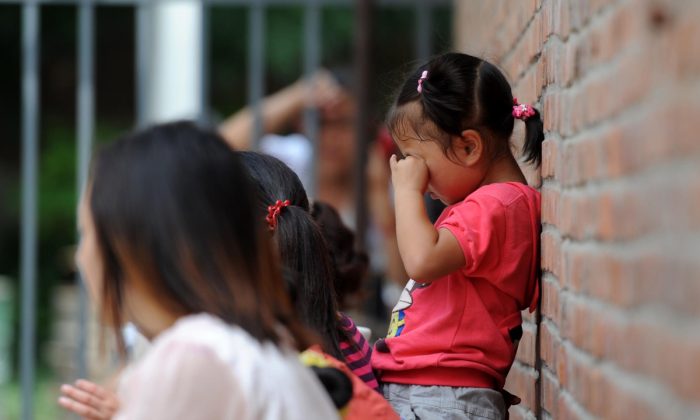 A girl outside a school.(STR/AFP/Getty Images)
Social Issues

On the first day of school, there’s bound to be someone who doesn’t quite make it to the right class. But what about a guardian taking someone to the wrong school altogether?

One grandfather did exactly that. He sent his granddaughter to the wrong kindergarten, despite her protesting, according to the Chinese online news outlet Pear Videos.

After the unnamed girl told him that it was the wrong school, the grandfather, also unnamed, said he thought she was just trying to trick him to get out of class, according to Pear Videos.

Teachers at the kindergarten contacted the police, who later took the girl to the correct school in Chaohu city in Anhui Province, China, on June 20.

A Case of Mistaken Kindergartens

When the grandfather arrived at the kindergarten with his granddaughter, she told him that they had gone to the wrong place. “Her grandfather said, ‘you just don’t want to go to school,'” one unnamed police officer told Pear Videos.

“Even your father said you go to this kindergarten,” he said. Then, he left.

The girl then went into one of the classrooms and staff quickly realized that they did not recognize the little girl. They then contacted the police to help resolve the issue, according to Pear Videos.

“The kindergarten called the police, saying that a child had showed up to the school, but did not belong there,” the officer told Pear Videos. “After we went there, the girl said she was from another kindergarten, and that’s when her grandfather sent her there.

“He said it was definitely this kindergarten.”

Police confirmed that it was the first time the grandfather had sent the girl to school. They also mentioned that the two schools were relatively close to one another.

Before sending the girl off, the police made the most of the comical situation, recording a video of an officer instructing the girl on how to manage her grandfather.

“It was your grandpa, right? [He] sent you here,” the officer says in the video footage.

“Next time you tell your grandpa clearly, that you’re not at this kindergarten, okay?” The girl twists her feet around and holds her tongue as the officer holds her hands to comfort her.

Police contacted the parents who then came to collect her and send her to the correct school.