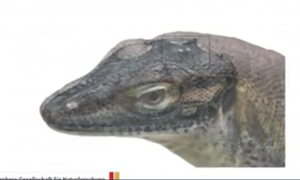 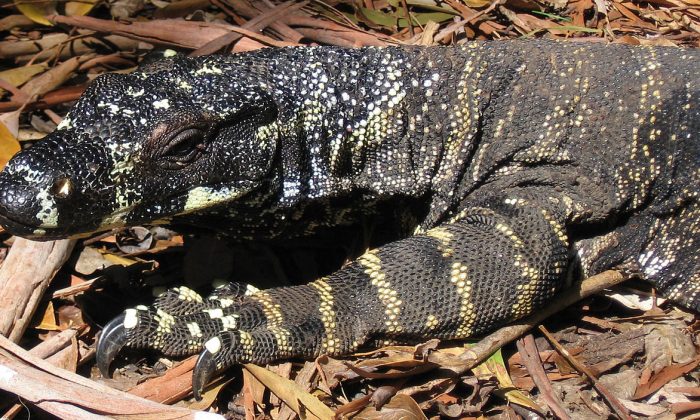 An Australian man said he was forced to take desperate measures when he spotted a giant lizard clutching a bunny in its jaws.

Malcolm Thorn, of Sydney, Australia, said it was a 5-foot-long goanna, or an Australian monitor lizard, according to the Daily Mail.

Thorn said the lizard climbed up his back screen door about 8 inches from where he and his dog were sitting. The lizard, he recalled, was almost as big as the door.

After using the rake to pry the lizard off, the rabbit was “squealing like hell,” but the lizard let it go and it “hobbled off,” he said.

Thorn said that when the lizard dropped to the ground, it came straight at him.

“I thought he was going to go straight up me,” the 75-year-old told the Mail. He again used the rake to keep the goanna at bay before it ran off.

Thorn noted that while he had seen them before, they never got that close to him. The lizards, in years past, tried to steal eggs from turkeys on his land.

Since the turkeys hadn’t laid any eggs, the goanna went for the rabbit.

He’s also seen wallabies, echidnas, and a number of birds, the Mail reported.

Thorn believes that the rabbit survived the ordeal, he said.

According to the Queensland Museum, goannas “contains the world’s largest living lizard, the Komodo Dragon (Varanus komodoensis) from Indonesia which grows to more than [14 feet]. The Komodo Dragon is most closely related to the Lace Monitor (Varanus varius) and there is fossil evidence suggesting that Komodo Dragons once also occurred in Australia.”

The website says, “All goannas are carnivorous, consuming anything they can overpower; insects, small mammals, frogs, birds and reptiles. The larger species will even tackle large, dangerously venomous, snakes. A mummified Perentie in the Queensland Museum collection died during a failed attempt to eat an echidna. The echidna is still firmly lodged in its mouth (this specimen can be seen in the museum’s Inquiry Centre). Goannas will also scavenge and it is not unusual to see Lace Monitors emerging from the carcasses of dead cows.”

In January 2019, a goanna bit an 8-year-old girl on a beach in Brisbane, Australia, the Guardian reported.

“It was a very concerning incident,” a senior operations supervisor, Jayney Shearman, said.

“Whilst walking through a camping ground [she] was attacked by a goanna that made quite a nasty laceration.

“It was quite difficult to get the goanna off the child and needed a couple of people to become involved to remove it from her foot.”

Regarding the girl, “She was quite distressed … Any wildlife is notoriously unpredictable, so on this occasion it was a nasty and savage attack,” Shearman said.