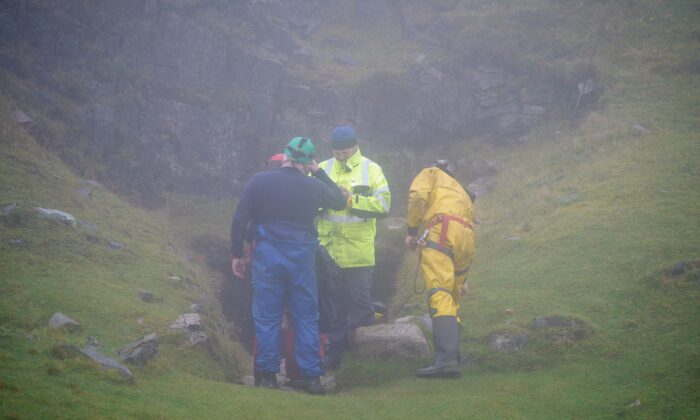 The man was brought out of Ogof Ffynnon Ddu in the Brecon Beacons. (Ben Birchall/PA)
UK

Man Rescued From Welsh Cave After Being Trapped for 54 Hours

An injured man rescued from a cave after spending more than two days trapped inside is doing “remarkably well.”

The man was brought out of Ogof Ffynnon Ddu in the Brecon Beacons at around 7.45 p.m. on Monday following a 54-hour ordeal.

After being lifted to the surface, he was clapped and cheered by rescuers before being helped into a cave rescue Land Rover ready to be transported down to a waiting ambulance.

Around 70 volunteers made their way down off the mountain to the rescue centre before watching as the man, who is in his 40s, was driven away to Morriston Hospital in Swansea.

“He’s being assessed at the moment and we’ll know more in a short while.”

Gary Mitchell, South and Mid Wales Cave Rescue Team’s surface controller, said: “To get that news that he’s finally out, he’s on the surface, and being well looked after is clearly ecstatic for all of us.”

Described as an experienced caver, the man had been trapped since Saturday at around 1 p.m. after suffering a fall.

His injuries are said to be non-life threatening, but are believed to include a broken jaw, leg, and spinal injuries.

More than 240 people have been involved in the the operation, and at least eight cave rescue teams from around the UK.

Teams of rescuers had been working in shifts to bring him to safety but had been unable to airlift him to hospital by helicopter because of the weather.

Peter Francis, a SMWCRT spokesperson, said the rescue is the longest in South Wales caving history.

The 74-year-old said: “This is the longest rescue we’ve ever done but we’re very pleased with the progress being made.

“The caver was very unlucky here. He’s an experienced caver, a fit caver. And it was a matter of putting his foot in the wrong place.

“He wasn’t in a dangerous part of the cave, it’s just something moved from under him.”

Paul Taylor, spokesman for South and Mid Wales Cave Rescue Team, said the man had gone into the Cwmdoor entrance of the caves before he fell.

The caves located near to Penwyllt are 300 metres deep, making them the deepest in the UK.

Discovered in 1947, they are also the third longest cave in the UK stretching more than 30 miles.