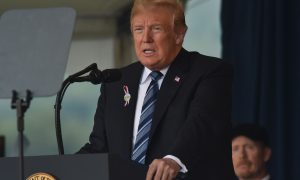 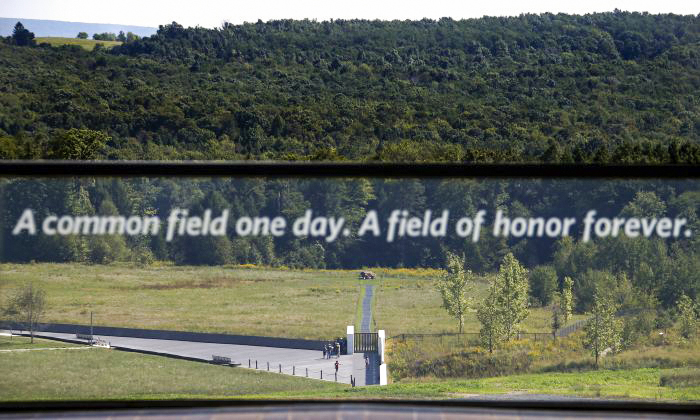 It was a beautiful day for golf and Steve Aaron, then-deputy communications director for Pennsylvania Gov. Tom Ridge, intended to enjoy a few rounds with coworkers who were enjoying a final leisure day before state senators and representatives returned to session in Harrisburg.

Most folks still carried beepers in 2001, rather than cellphones. That morning, Sept. 11, high-level state workers on the golf course all started receiving beeper messages at about the same time. Soon, they learned that two planes had struck the World Trade Center towers in New York.

Aaron and others quickly went to the state emergency response center in Harrisburg.

“Not long after arriving, we learned that a plane somewhere above Pennsylvania was not headed in the direction it was supposed to be going,” Aaron told The Epoch Times.

By that time, a third plane had crashed into the Pentagon in Washington.

Next, they heard that United Airlines Flight 93 had crashed at a former strip mine near Shanksville, Pennsylvania.

In the terrifying minutes before the crash, hijackers forced passengers and crew to sit quietly in the back of the plane. Using Airfones from the seatbacks, passengers made 37 calls, reporting the hijacking and having final conversations with family and friends. Through the phone calls, they learned of the other hijacked planes and realized Flight 93 was part of a larger attack. They held a vote and decided to fight back. Passengers and crew stormed the cockpit.

According to the 9/11 Commission, the terrorists remained in control of the plane and at 10:03 a.m., some 20 minutes short of the theorized intended target of the U.S. Capitol, they intentionally crashed in Pennsylvania rather than risk the passengers and crew regaining control.

Ridge was in Erie visiting his mother when the Federal Aviation Administration shut down all air travel.

“It took us time to get permission to fly him to Harrisburg on a state police helicopter,” Aaron said. “It became apparent we had to make arrangements to get out to Shanksville, so he could see what was going on on the ground. A contingent of media was gathering there.”

They arranged a Chinook helicopter from Fort Indiantown Gap National Guard Training Center, and by early afternoon, Aaron was part of a small team accompanying the governor to the scene of the crash.

“My biggest memory is how loud that helicopter was. The governor had a helmet with headset and could communicate with [the] pilot,” Aaron said, but the rest of the passengers couldn’t communicate verbally. They wrote notes and planned the governor’s message for when they landed.

“We knew our country was under a coordinated attack,” Aaron said. “We were focused on our work for the governor.” But he didn’t have a chance to fully take it in. He did not see images of the towers going down until he got back home that night and saw videos of what happened.

“The pilot circled the crash site to give the governor a vantage point. It was just a charred scar of earth. Debris had slid under trees. It was just a smoldering hole.”

Once the helicopter touched down, Ridge was met by state police and briefed on the scene.

“Governor Ridge has talked often of his lasting memory of all the first responders, who rushed to the scene wanting so badly to help, but there was nothing for them to do. He also talks about how those passengers and crew members were truly the first responders who made sure that plane did not reach its intended target,” Aaron said.

He counted 88 television cameras waiting for a message from the governor.

“We were proud of how, at that moment of sadness, he offered words of comfort about what happened.”

Ridge later became the first director of the U.S. Department of Homeland Security, which was formed in response to the terrorist attacks.

While assessing the damage that day, the administration also took steps to harden potential targets such as Pennsylvania’s nuclear power plants, because no one knew if there would be more attacks.

Vividly etched in Aaron’s memory is the flight back east to Harrisburg. The Chinook’s cargo door was open, and he could see a beautiful sunset in the west.

“It’s so loud that we couldn’t talk to each other. You are alone with your own thoughts. I knew that our world had just changed. I was not aware at that point of how many people died in New York and Washington.”

Today, Aaron is president of SRA Communications in Harrisburg and says he is privileged to work with the Friends of Flight 93 National Memorial, which includes some family members of those who died in the crash.

The story shows the remarkable heroism of the people on that flight, who took a vote and decided to rush the cockpit and saved one of the most important symbols of democracy in the world, he said.

To make sure that story is told forever, the group has created the Flight 93 Heroes Award to connect stories of heroism today with the heroism aboard Flight 93. The award identifies individuals who act with extraordinary heroism; show courage at the risk of one’s own personal safety; and put the physical well-being of someone else above themselves.

Sivad Johnson, a Detroit, Michigan, fire department sergeant, is the first recipient of the Flight 93 Heroes Award. Johnson was off-duty on Aug. 21, 2020, and walking with his daughter when he heard three girls in the Detroit River screaming for help, and immediately jumped into the water. He died while trying to save the girls. It is believed he was caught in a rip current.

The three girls were rescued by others who also were helping.

Johnson’s sister, Eboni Thomas, nominated her brother for the award. She said he always put others first and lived his life giving back to the community and investing time in family and loved ones.

The award, announced on Sept. 10, was accepted on behalf of Johnson by his sister Eboni, brother Jamal, father William, and daughter Hayden.

It was one of many observances at the Flight 93 National Memorial this 20th anniversary week.