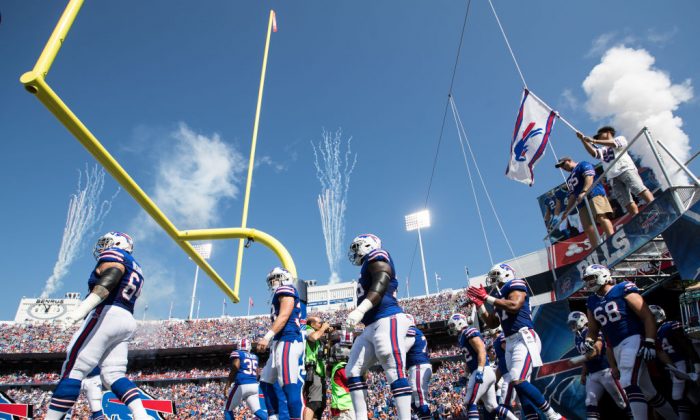 Buffalo Bills take the field before an NFL game against the Denver Broncos at New Era Field in Orchard Park, N.Y., on Sept. 24, 2017. (Bryan Bennett/Getty Images)
US News

At a recent NFL game, several Buffalo Bill players knelt during the national anthem in protest while others locked arms.

The kneeling was allegedly an act in response to President Donald Trump’s recent remarks on Twitter that criticized NFL players for not standing proud for the American flag and national anthem.

“Sports fans should never condone players that do not stand proud for their National Anthem or their Country. NFL should change policy!” Trump tweeted on Sept. 24.

Sports fans should never condone players that do not stand proud for their National Anthem or their Country. NFL should change policy!

Trump also said on Monday, Sept. 25, that kneeling has nothing to do with race. Instead, he said, it’s about the “respect for our Country, Flag and National Anthem. ”

Now one stadium worker is making headlines for his own protest.

“I waited until the National Anthem ended, I took off my shirt, threw my Bills hat on the ground, walked out,” Nikischer told NBC affiliate WGRZ at his West Seneca home.

He said that he has no problem if the players protested before the national anthem began. Nickischer said the issue was when the kneeling kept going on during the song.

“During the national anthem…the song that is about our country, our veterans that fight and die for us, it’s just something I feel you shouldn’t disrespect that way,” he told WGRZ.

“I believe people have the right to protest; I just don’t believe that’s the proper venue for it” he said.

Nikischer is not the only one who does not agree with the kneeling.

Safety Buffalo Bills player Jordan Poyer’s fiancée, Rachel Bush, said that the couple has the same feelings. On Saturday night Poyer decided he would not partake in an on-the-field protest during the national anthem, WGRZ reported.

Nikischer told WGRZ the decision he made was a hard one and that he still missed his co-workers.