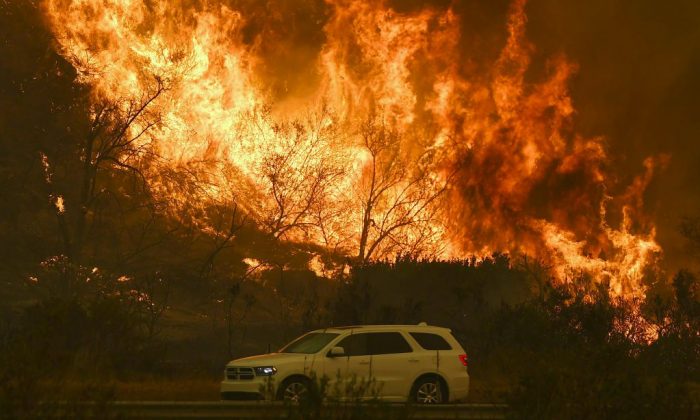 Vehicles pass beside a wall of flames on the 101 highway as it reaches the coast during the Thomas wildfire near Ventura, Calif., on Dec. 6, 2017. (Mark Ralston/AFP/Getty Images)
US News

Man Pulls Over to Save Wild Rabbit From California Wildfire, Becomes Viral Hero

With wildfires engulfing southern California, one man made the brave decision to rescue a rabbit he spotted on the side of the road.

In widely shared footage broadcast by KABC, the man—who refused an interview—can be seen in distress by the side of Highway 1 in Ventura County.

It can be seen that he has spotted something but it’s not clear what it is.

Then he picks up a small rabbit and cradles it in his arms, rescuing it from the nearby flames.

Although the identity of the man is unknown, his actions have been praised by many on social media.

A Twitter user called “myordinarylife.org” wrote: “And just like that my faith in humanity is restored. We’re definitely broken right now but THIS? This means we’re going to be okay.
Thanks, young man, for being a good person. Our world needs a lot more people like you.”

The wildfires have so far forced tens of thousands to flee their homes around Los Angeles.

Another widely shared video showed a perilous drive to work in of front flame-covered hillsides.

High winds have created a further danger for residents.

“We are in the beginning of a protracted wind event,” Ken Pimlott, director of the California Department of Forestry and Fire Protection, told the Los Angeles Times. “There will be no ability to fight fire in these kinds of winds.”

So far, no civilian casualties have been reported, according to Reuters, although three firefighters have been injured.

If you enjoyed reading this article and think your friends would also like it, use the buttons below to share it on social media.