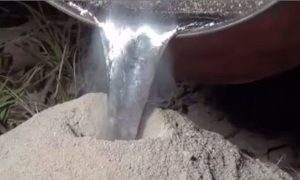 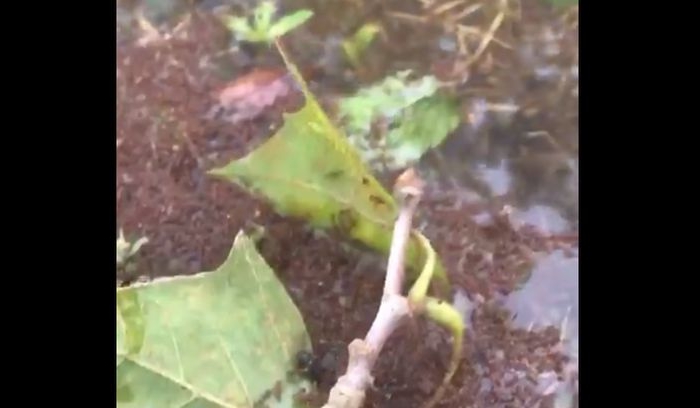 A colony of fire ants, or red-colored stinging ants, were observed on September 16 engaging in a survival tactic post-Hurricane Florence where they bunch together to create a raft to float on top of the water to protect the queen. (Credit: Kinston Police Department via Storyful)
Trending

An intrepid YouTuber poured molten aluminum into an abandoned fire ant colony, and he got a strange result.

According to the uploader, the “resulting cast is huge, weighing 17.9 lbs. and reaching a depth of 18 inches.”

He spends a good deal of time digging the object up and scraping it off.

It doesn’t appear that any ants were incinerated during the process.

“Anthill Art pours aluminum into anthills and lets it harden,” according to The Verge. “The sculpture is then excavated and blasted with water to remove dirt and impurities, and the final piece reveals the amazing twists and turns that make up an ant colony.”

“The Christmas-tree-like sculpture above is a cast of a fire ant colony—there are casts of different kinds of ants that have been previously sold, all taking on peculiar shapes. The clear losers in this situation are the ants—according to a representative posting on Anthill Art’s Facebook page, sometimes the colonies are abandoned and sometimes they’re not. The sculptures are insane and amazing pieces of art, if you can stomach their origins.”

Molten aluminum has many uses, but the strangest might be Anthill Art's gruesomely beautiful sculptures. The…

The viral video above isn’t the only time someone has poured molten metal into an ant colony:

However, the so-called sculptures have been called “controversial.”

The person who made some of the items, David Gatlin, has to search for anthills “that belong to fire ants—or more correctly, the red imported fire ant—because they are considered a pest and a nuisance and they are also not native to North America,” CertaPet says. Some have told him on Facebook that he’s “disgusting” for pouring metal into their colonies.

However, fire arts are considered invasive, coming into the United States in the 1930s.

The ants, meanwhile, have a sting that’s considered quite painful or even dangerous.

According to CertaPet, “Their colonies can contain as many as 100,000 to 500,000 fire ants, and when threatened, they will attack in large numbers. Some people have even died from a severe reaction to the fire ant’s venom. Fire ants also cause millions of dollars of damage each year to crops. And if all that wasn’t bad enough, fire ants also kill all types of creatures, including small reptiles, amphibians, birds and mammals. In other words, these are nasty creatures that very few people actually like.”

Some have said that Gatlin’s practice of pouring molten metal into a fire ant colony is no different that pest control workers using poison to rid homeowners of the pest.

Meanwhile, as for his original video, “Gatlin stated that he had to disable the comments section, because he got sick of everyone bickering about whether or not his work was cruel or not,” the website says.

A Buglife spokesman, Paul Hetherington, told the website: “If the nest is empty, we would support this casting as it raises awareness to the fantastic architectural prowess of ants. However, if the ants are still present, it is an extremely cruel way to kill them—of which we disapprove, as they are effectively boiled alive.”