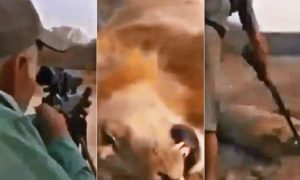 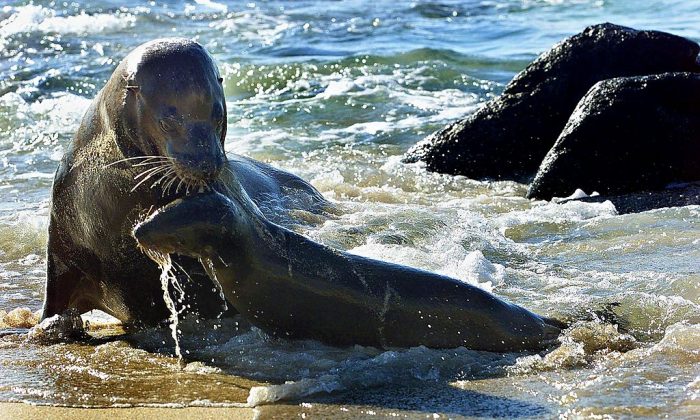 Man Poses for Picture, Has Dangerously Close Encounter With a Sea Lion

Daniel Carlin caught a big fish and posed for a photo, but he came within a few inches of being seriously hurt by a sea lion.

Carlin, 62, was smiling and holding the fish he caught at Mission Bay in San Diego, California when a sea lion leaped over the side of the boat and snatched his fish with its jaws.

The powerful mammal, which is estimated to be  300 pounds, also bit part of Carlin’s arm in the process.

This fisherman got more than he was angling for.

“It was terrifying. When the sea lion was taking me down and I was going at that rate of speed I knew I was going to die,” Carlin told ABC13. “This wasn’t this could be it—this was this is it.”

Carlin said the sea lion ripped his arm down and crushed his chest with an unbelievable force as it took him into the ocean.

Trish, his wife, was with him and started screaming as bubbles emerged from the spot that her husband had gone into the ocean. According to The Guardian, he was taken about 20 feet down into the water.

Carlin fought with the sea lion for about 20 seconds before breaking free and swimming to the surface. On the way up, the sea lion took a final swipe and punctured a bone in his foot, according to reports.

Finally, Carlin crawled onto the boat, with multiple wounds such as a broken hand.

He spent about two days in the hospital following the attack. He got a gash on his hand that required about 20 stitches.

Meanwhile, Carlin’s experience as a free diver might have been what ultimately saved his life.

“He does a lot of diving, so he didn’t panic. He probably knew the sea lion would have to let him go or did something to force it to let him go,” said Mike Perry, who owns the boat that’s docked next to Carlin’s.

The fisherman says the sea lion dragged him underwater, and they struggled for about 20 seconds: http://cnn.it/1EH5GTy

Lt. John Sandmeyer, who responded to the scene, added to City News that sea lion attacks are very rare.

“Obviously [he’s] a little bit in shock and this was a tough incident, very unusual, where we don’t have this kind of thing happen,” Sandmeyer said. Local lifeguards noted that people shouldn’t feed sea lions or throw fish guts overboard, actions that can lead to sea lion attacks. The Carlins insist they did neither.

Carlin, meanwhile, is keeping the photo of the sea lion latching onto his hand as his screen saver to remind himself to live life to the fullest.

“I feel very lucky to be alive,” he said.

Researchers in Alaska captured the moment a raft of sea lions pursued their boat.

According to Yahoo News, the researchers were on a marine bird survey near Alaska’s Katmai National Park and Preserve when they spotted the sea mammals.

The sea lions could be heard making unusual noises, which some have described as “zombie-like.”

The Marine Mammal Center says that sea lions can get to 850 pounds for males, and females can weigh 220 pounds.

California sea lions are located from Vancouver Island, British Columbia to the bottom of Baja California in Mexico, the Center says.

“They breed mainly on offshore islands, ranging from southern California’s Channel Islands south to Mexico, although a few pups have been born on Año Nuevo and the Farallon Islands in central California. There is a distinct population of California sea lions at the Galapagos Islands. A third population in the Sea of Japan became extinct, probably during World War II,” it says.