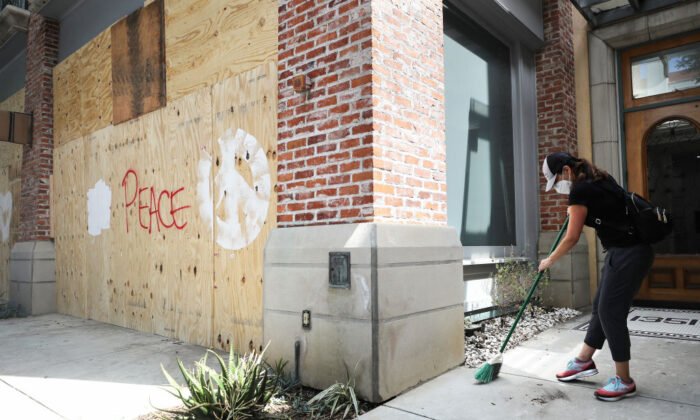 A volunteer cleans in front of a shop window boarded up a day after looting occurred amid protests in Santa Monica, Calif., on June 1, 2020. (Mario Tama/Getty Images)
Southern California

Micah Tillmon entered his plea to possession of an unregistered destructive device, in particular an incendiary device, a charge that carries a sentence of up to 10 years in federal prison, according to the U.S. Attorney’s Office.

At sentencing on Dec. 6, Tillmon is also expected to be ordered to pay restitution in the amount of $500,000, court papers show.

The defendant is also facing multiple looting and commercial burglary charges in a complaint filed by the Los Angeles County District Attorney’s Office. However, the federal case is proceeding first.

Authorities said Tillmon used a homemade incendiary device to set fire to the Sake House at the corner of Santa Monica Boulevard and Fourth Street on May 31, 2020, during a night of apparently organized looting blocks from a protest meant to decry the in-custody death of George Floyd in Minneapolis a week earlier.

According to documents filed in Los Angeles federal court, security video from the restaurant showed Tillmon removing “a red tube-shaped object from his jacket, which he placed behind the reception desk area of the restaurant before walking away. Within seconds of that action, smoke and fire appeared from the area.”

Investigators with the Santa Monica Fire Department determined that the fire was caused by the object Tillmon placed in the restaurant. He was identified by Santa Monica police detectives, who reviewed numerous security videos and social media posts.

Tillmon was also linked to the fire when investigators uncovered video footage showing his white Ford Explorer parking next to the Sake House four minutes before the fire started and then reversing across the street soon after the blaze began, according to an affidavit filed in the case.

That same video appears to show the Explorer parking about 500 feet away from the Sake House, and Tillmon exiting the vehicle and looting a nearby business, according to the U.S. Attorney’s Office.