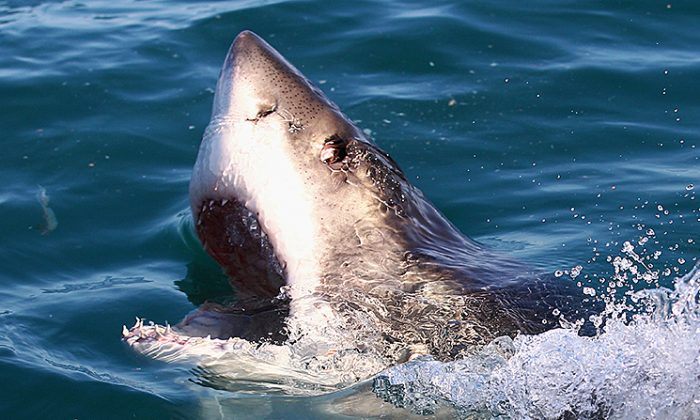 Eugene Finney was enjoying the beach with his daughter on a perfect July day in Huntington Beach, California.

“The surf was pretty big that day,” said Finney, 39. “The waves were about 7 to 9 feet, and the water is pretty deep. You can’t touch the bottom.”

He and his 10-year-old daughter Temple dove into a cresting wave, with Finney wrapping her tight to brace her against the current. When they were underwater, Finney felt something slam into his back.

“Something struck me from behind. I’d never been hit like that before. It was pretty jarring. It kind of gave me an instant whiplash,” he said.

Read More
Massive 15-foot Shark Tracked for Months on Its Journey From Canada Is About to Reach New Milestone
Video Shows 1,000 Blacktip Sharks Off Coast
Huge Shark Found With Head Bitten Off by Even Bigger Sea Creature in Australia

Finney quickly moved toward shore with his daughter, and as soon as they got out his girlfriend and kids saw a long, bleeding gash on his back.

He went to rinse off his wound, but when he got back he saw a crowd forming at the edge of the water. Shark fins had been spotted.

Finney was skeptical he’d actually been attacked, and he and his family boarded a plane back to their Massachusetts home a few days later. Soon after, he returned to his job, but the pain was getting worse. His boss insisted he go to the doctor, saying “You don’t look good,” Finney recounted to the San Jose Mercury News.

He went to St. Elizabeth’s Medical Center in Brighton complaining of serious chest and back pains, but he never could have predicted the full diagnosis.

“The pain was caused by interior bruising of the thoracic cavity due to blunt force trauma,” Finny told CBS. But that was just the first part.  “They had discovered a growth, or a tumor, on my right kidney about the size of a walnut,” he said.

It was cancer. A couple of months later, doctors removed the tumor using robotic surgery.

“If this didn’t happen with the shark, causing me to go in with this chest pain, I would have never known about this cancer,” Finney stated. “I feel fortunate. I really feel like I’ve gotten a second chance at life and I’m not going to blow it.”

“Over the last half-century, there have been more unprovoked shark attacks in Florida (27 out of a total 139) between 2-3 p.m. than any other time of the day,” says National Geographic. “New Smyrna Beach in Florida is the shark attack capital of the world according to ISAF. It is estimated that anyone who has swam there has been within 10ft of a shark.”