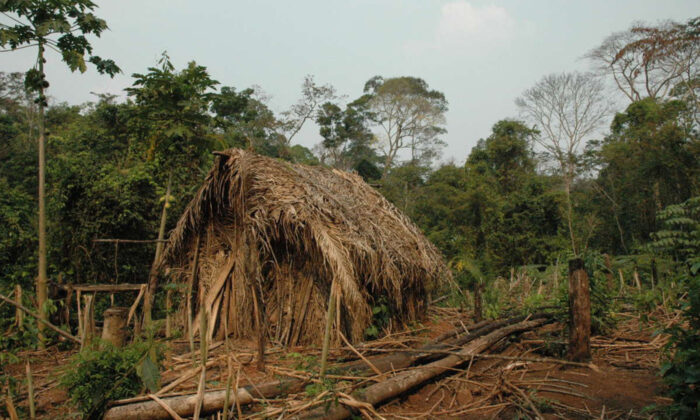 A tiny hut built by "the Man of the Hole" in Tanaru territory, Rondônia state, Brazil. (J. Pessoa/Survival International)
Americas

An indigenous man known as “The Man of the Hole” has died, a tribal human rights organization said.

He is believed to be the last member of his tribe in the western Brazilian Amazon, Survival International said in a statement.

No outsider knows his name. He got the name “The Man of the Hole” for his habit of digging deep holes to trap animals or to hide in. Some of the holes have sharpened stakes planted inside.

He is also the only inhabitant of Tanaru Indigenous Territory, a small island of forest in a sea of vast cattle ranches, in Rondonia state.

FUNAI, Brazil’s Indian Affairs Department, became aware of his existence around 1990. His location was confirmed in 1996. FUNAI has tried to establish contact with him.

In 2005, Fiona Watson, research and advocacy director of Survival International, visited the man’s house and garden.

However, the government agency decided to stop trying to contact “The Man of the hole” afterward.

In 2018, FUNAI released video footage from a chance encounter with the male in which he can be seen hacking at a tree with an axe-like tool.

Battle for the Land

The death of the last inhabitant of the Tanaru Indigenous Territory will open a new page of the battle for the land he once inhabited.

Under the Brazilian constitution, some indigenous territories are protected by Land Protection Orders. However, in order to renew the protection order successfully, organizations like FUNAI and Survival International have to prove the existence of these tribes.

Currently, there are seven territories in Brazil protected by Land Protection Orders covering areas of nearly 1.5 million hectares in total.

The protection order for the Tanaru Indigenous Territory—an area of about 8,000 hectares—was established in 1998 and was set to expire on Oct. 26, 2025.

Once the protection order is expired, loggers, farmers, or illegal miners may get access to the land.

Some organizations like the Observatory for the Human Rights of Uncontacted have called on the government to permanently protected the Tanaru Indigenous Territory as a memorial.