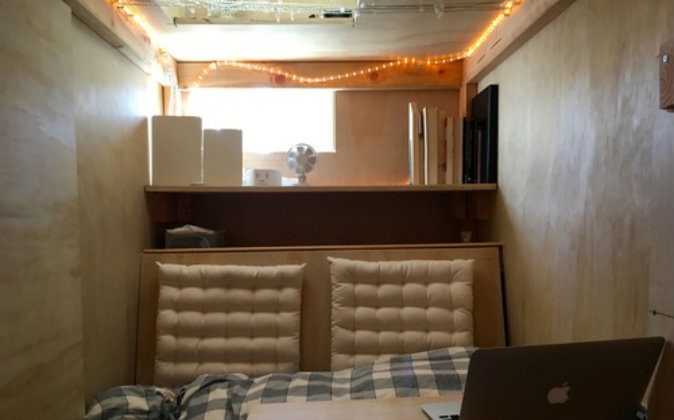 Man Moves to San Francisco, Pays $400 Per Month to Live in Plywood Box

A man from San Francisco is living in a plywood box in his friend’s living room—for $400 a month.

At first, the San Francisco-based illustrator wanted to split a two bedroom apartment with a friend, but, as the rent was still too high, he figured a bedroom pod would have to do saying, “The pod is just a solution that works for me.”

Top 10 Best Cities in the World to Live In

Chinese Woman Enters Her Apartment, Finds Three Men Living There by Accident
People are typically surprised that I would want to live in a pod.
— Peter Berkowitz

Berkowitz has a bed, a fold down desk, pillows to act as a couch, and a window to let in natural light so he can read “comfortably” from anywhere on his bed—it’s “the coziest bedroom” he’s ever had, he said.

“People are typically surprised that I would want to live in a pod, but I think they tend to underestimate how pleasant a pod can be if it’s designed smartly,” Berkowitz wrote on his blog post.

The median rent for a one-bedroom apartment in San Francisco is $3,460 a month.
— Zumper

Berkowitz offered his services on his blog for those who are interested in a suitable pod with a “very reasonable price.”

“I’m more interested in getting good at building pods than in making money at this point,” he wrote.

The median rent for a one-bedroom apartment in San Francisco is $3,460 a month, according to Zumper, a real-estate marketplace.