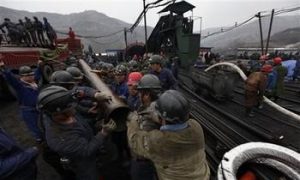 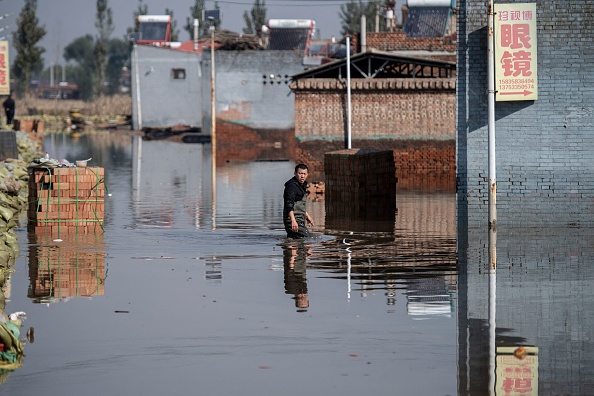 A man makes his way along a flooded area after heavy rainfall in Jiexiu in the city of Jinzhong in China's northern Shanxi Province on October 11, 2021. (China OUT/AFP via Getty Images)
Social Issues

Floods Devastate China’s Shanxi as Flood Victims Fend for Themselves

Recently, floods have devastated the entire province of Shanxi in northern China, an area famous for vast reserves of coal and iron.

Dam water discharge coupled with heavy rains and landslides, have damaged railways, and caused tens of thousands of victims to flee, farmlands to vanish, and massive coal mines to suspend production.

In the evening of Oct. 7, the local dam of Yuncheng City collapsed and flooded nearby counties and villages. Local residents fled to drier ground.

Ms. Zhao, a resident of Qiaodong Village, Xinjiang County, said: “It was in our village, the dyke collapsed yesterday [Oct. 7] … the breach was huge. The water kept rising over the bank … the armed police and local youngsters tried to block it today, but it was too huge.”

She added, “The flood [water] was more than three feet high in the streets.”

There are around 5,000 residents in her village, and their low-lying houses are steeped in water. The villagers either stay with relatives and friends or take refuge in the gymnasium.

Zhao said, “Now, I only care about surviving.”

The temperature dropped below 50F. Most people evacuated carrying just a few clothes. Villagers eat instant noodles, sausages, and other food that is mostly donated by volunteers.

Mr. Li is a shop owner in Yangwang Town, Xinjiang County. He said, “The reservoir discharged in the early morning of the seventh, it flooded the county and the village … the embankment failed … villages were completely flooded, the water was very high.”

He said that the flood did not happen when it was raining, it occurred after the reservoir discharged, “It was said that the water came from the dam in Taiyuan City, because too much water was released.”

Taiyuan City, the capital of Shanxi, is located in the center of the province. According to the weather records, it rained in Taiyuan from 6 a.m. Oct. 4 through 6 p.m. Oct. 6.

Villagers have suffered tremendous losses because of the floods, as all crops are soaked in water. “Our crops on the three plus acres of land are all over. There will be no harvest this year. The loss is heavy,” Zhao said morosely.

According to Chinese media reports, multiple dykes failed due to heavy rains and a torrential influx from upper reaches, which flooded thousands of miles of fertile fields and damaged roads.

Zhuangzi Village is known in Taiyuan City for its crops, vegetables, and livestock.

On Oct. 8, Mr. Lin, a local villager, said the flood affected more than three acres of land in the village, “Our vines—grapes were growing—are now all gone.”

Lin believes that the cause of the flood was the drainage canals that were destroyed last year when an eight-acre plus disaster relief material warehouse in Shanxi Province was built.

He said, “The canals go through the construction site, they just filled the canals with soil … it happened just last year, villagers opposed the idea many times, but no one listened.”

Villagers complained to the manager of the warehouse, “Instead of providing relief, it brought disaster!” said Lin.

On April 22, the Central Ecological and Environmental Protection supervision team reported pollution in the canal regions surrounding the Fen River that runs northeast into the basin of Taiyuan City. The southeast bound river flows through the city before merging into the Yellow River coming from the west. Taiyuan authorities established a work team to deal with the canals in the north juncture areas.

According to villager Mr. Zhao, reinstatement of the canals never happened.

Ms. Liu lives in the village at the lowest point of water discharge area around the dam in Jiexiu City.

She said, “Our village is always flooded whenever it’s [the dam reservoir] discharging water.”

She said no one expected the water to rise so high this time. Villagers were forced to quickly leave after seeing that  the sandbags had failed. “The dyke near the village collapsed,” she said.

During the hasty evacuation, villagers only managed to relocate some of their livestock. With no time to prepare, villagers stayed in motels with little clothing and received no aid.

Ms. Liu believes that a factory in the neighboring village blocked the drainage canal and should be held accountable for the flooding. She said her village has been the victim of flooding ever since .

Liu said, “The factory made enough money, but the heavy pollution finally caused it to close. However, rocks were left in the canals. We suffered such a huge loss this time, it’s everything we have.”

According to Liu, there are more than 1,000 people in the village. She said that local villages are mostly undeveloped and poor. She’s concerned her house will collapse from soaking in the flood water for days. “Homes are our roots. We finally built our homes after suffering so much hardship, but now they are all gone. Does the government care?”

Ms. Zhao, owner of a fruit picking yard in Jiexiu City, said that her family invested tens of thousands of dollars in building the yard, “It was just built a couple of years ago. It takes several years to grow a fruit tree. That’s my savings of years! I will be bankrupt!”

She said all the crops were soaked, and corn and sorghum were yet to be harvested. “I have four children. We can’t afford school this year. I don’t even have food to feed them. Our rations are gone.”

A Land of Generations

Jishan County also suffered from heavy rains that lasted for more than two weeks. Local villager Lin Jie told the Chinese edition of The Epoch Times: “The water storage capacity of the local Fen River has reached its limit. The disaster took place when floods were discharged from multiple upstream reservoirs but the water downstream had nowhere to go.”

Villagers were on watch along the dike when the water finally erupted around midnight on Oct. 7.

Lin said, “The water rose really fast, I heard the roaring waves … you can’t describe it.”

In less than an hour, the flood hit the last line of defense.

The village hurriedly sounded the first-level alarm. People moved to higher places on their own. At around 1 a.m. on Oct. 8, the water rushed into the village.

Lin said, “Everyone just hurried home to move the children and the elderly outside, abandoning everything else … At that time, I was totally shocked and didn’t know where to go.”

She continued, “It was so cold, we just walked toward the neighboring village in the highland.

“We could only sit by the road, it was around 2 a.m. We waited until a little past 6 a.m. when villagers finally woke up and found us sitting out there. They let us in and cooked some hot meals for the kids and elderly.”

While recounting the scene, Lin could not help crying, “It was really miserable.”

On Oct. 9, villagers borrowed a boat to go into the village. The flood water was around seven feet high and low-lying houses were all submerged in water.

Lin said: “That is our property, inherited from our ancestors. Who would leave the land where their family had rooted for so many generations? Many of us just stood by the entrance of the village. Just looking at it would bring us some comfort.”

She cried, “There are many online films on Weibo saying that we are making it up, and there is no flood. They should go to the village, take a look at those houses, and see what’s inside the house.”

Lin said that there’s no notice that a water discharge would occur.

Wang Hui, another villager, also said that authorities gave no warning to evacuate. “We don’t know if the village cadres were aware of it, but the villagers had no clue.”

Wang explained, “They did not say if the village would be flooded … we organized villagers to contain the flood on our own, and when all failed, we just evacuated on our own. That’s how it is.”

Wang said, “The authorities stated that Liang Yonglin, the director of the Emergency Management Bureau of Jishan County, instructed them to keep the breakage of the dyke as it is.”

As for the flood water, Wang complained, “We have pumps, but there’s no place to drain the water … and the authorities have provided no plan.”

“The leader only responded, ‘as long as you can eat and drink,’” Wang added.

Li Sha, a villager in Changzhi City, southeastern Shanxi, said that the flood wasn’t so deep in her village, but most villagers live in traditional dwellings, known as Yaodong, earth caves carved along hillsides. Days of rain have sunken the dwellings and buried belongings under the earth.

Li said, “Our village was flooded for five days, but no officials care. There are more than 800 villagers in the area.

“A few leaders came to the caves, they just looked and told us to get outside quickly, to seek dwelling with friends and family. There’s no word from the government.”

On Oct. 9, Sun Yi, a villager in Jiexiu City, central Shanxi, said the flood water was still deep, and the houses were all soaked. She was worried that the houses could collapse at any time

She said, “It’s very dangerous for those people who tried to prevent the breakage. It’s very cold. The temperature was low, they couldn’t do anything about the water.”

About 70 local villagers went to the town hall demanding water pumps, but the government just kept them waiting.

She said: “We have been here since this morning. It’s now around 5:30 p.m. Around a dozen of us are still waiting. We can’t leave in case people from other villages take all the pumps.”

As for the damages from the flood and compensation, Sun said that the local government has not mentioned it.

All interviewees were given pseudonyms for their safety.