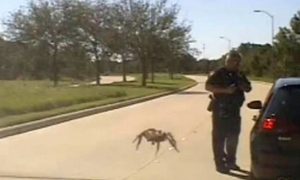 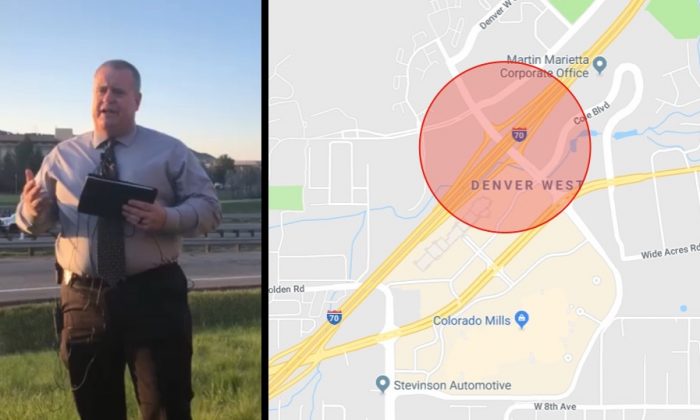 A local YouTuber transmitting from his car while stuck in a traffic jam on the I-70 in Colorado captured the horrific moment a semi-truck barreled by before plowing into a number of cars up ahead, killing multiple people.

Joshua McCutchen, who runs the channel “Burger Planet” on YouTube, posted the video online after the fiery crash that took place just before 5 p.m. on Thursday, April 25, near the Denver West Parkway bridge in Lakewood. [Warning: contains course language]

Police said multiple people were killed in the crash.

Authorities have not released specifics regarding the death toll, citing ongoing efforts by fire crews to deal with persistent hotspots in the wreckage.

McCutchen was stuck in a traffic jam caused by an accident further up the road and was speaking into the camera when a tractor-trailer was captured on video flying by along the shoulder.

In the video, the YouTuber yells as the semi barrels by, screaming “Oh my God! We almost [expletive] died.”

Less than a minute later McCutchen turns the camera around and records a large plume of black smoke.

Flames can be seen shooting upwards from the wreckage.

In another video, headlined “I70 Lakewood Colorado Crash & Interview with Hero,” McCutchen speaks with a man who witnessed the crash and called 911.

“I was down here and I saw the semi truck that was out of control and it went about 80 miles an hour and I just saw an explosion,” he says, panning with the camera towards the crash site as smoke billows.

“Yeah, as soon as he came out from under the bridge he plowed through cars,” says the interviewee, not identified by name. “I looked over and his cab had rolled over and just come on flames.”

“I hollered at my buddy and I told him ‘Call 911’ and then I took off under the bridge and started helping people,” the man adds.

“Did you think about your own safety?” McCutchen asks.

What Is Known About the Crash

The large crash and fire that shut down Interstate 70 in both directions in Lakewood, Colorado, claimed multiple lives.

Six people were transported to the hospital, including the driver of the semi that is being investigated as a possible cause of the accident.

Police called it “one of the worst accidents” the department had seen in the city of Lakewood, involving 11 cars and 4 semis, according to ABC7.

Ty Countryman with the Lakewood Police Department said a tractor-trailer heading east down a hill crashed into slower traffic in the afternoon hours of Thursday, April 25, sparking a massive fire.

Countryman said the semi plowed into traffic that had been backed up near Denver West Colorado Mills Parkway due to an accident further up the road.

He said that after impact, a vehicle ignited and the fire spread.

A towering plume of black smoke was seen for miles as firefighters doused the burnt-out shells of several vehicles in the vicinity of the Denver West Parkway Bridge, The Associated Press reported.

West Metro Fire Rescue said on Twitter that a firefighter suffered minor injuries when he was hit by debris, possibly from an exploding tire.

Our crews working a multiple car crash on I-70 near Colorado Mills. Several vehicles are on fire, firefighters are working to extinguish the blaze. There are at least two injuries. Several agencies are assisting. Please avoid the area. pic.twitter.com/XUZygCKRS0

The Lakewood Police Department said on Twitter that the highway would remain closed “at least overnight.”

He did not specify a death toll, citing persistent hotspots and ongoing fire suppression efforts by West Metro Fire Rescue.

“We have now confirmed multiple fatalities in this,” Countryman said at an on-location press conference around 9 p.m. local time. “We still are just getting to the wreckage.”

He said the investigation is in its early stages, as fire crews were still working to make the site safe for investigators due to the “the devastation and the fire” at the crash scene.

“They’re still working on the hotspots and—I wouldn’t say flare-ups—but the issues that come up.”

Six people were taken to the hospital. Their conditions are unknown.

“The driver of the semi is one of those six,” Countryman said.

“Investigators are certainly going to talk to him this evening to try to piece together what we know and what we don’t know in this crash right now.”

Countryman was earlier cited by 9News as vowing to investigate the cause of the tragedy.

“We have to try and figure out why this happened,” Countryman said. “The semi coming into the slower traffic. There’s got to be a reason. We’ll investigate and find out.”

The spokesman said investigators had begun interviewing witnesses to try piece together exactly what happened.

“We are still working on identifying those people that were killed and we’re still accounting for all people involved in the crash,” Countryman said.

Final update for the night on I-70 crash. Highway will remain closed at least overnight. We can confirm that there are multiple fatalities and 6 others taken to local hospitals.

“EB I70 is CLOSED at Ward Rd by this crash. School bus, tanker, and several cars involved. No word on injuries but several children are being evaluated in the 2 ambulances on scene.”

EB I70 is CLOSED at Ward Rd by this crash. School bus, tanker, and several cars involved. No word on injuries but several children are being evaluated in the 2 ambulances on scene. #cotraffic @KOANewsRadio pic.twitter.com/Tf5rwVvdsB