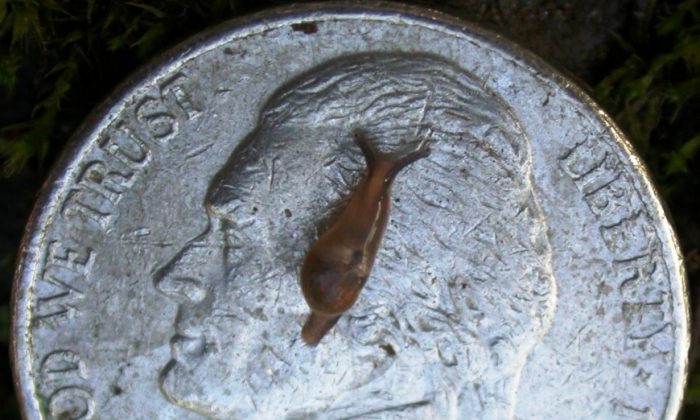 A type of slug that might carry the rat lungworm. (Screenshot via Hawaii Department of Health)
US News

A Florida man thought his ‘free’ Hawaiian trip with his wife was going to be perfect. What he didn’t expect was to return with an incurable parasitic disease that left him bedridden for months.

Ron Fields, who was 62 at the time, had saved up enough credit card reward points so that he could take a relaxing vacation with his wife, Darlene, in Hawaii.

The couple, who were physically fit and were devoted to eating organically for the past few years, had only a few more days left on their trip when Ron complained that something “was going on with his skin,” reported Food Safety News.

“My husband woke up in the middle of the night and couldn’t quite describe what was going on with his skin,” Darlene said told the news website from their Florida home.

“It was worse in L.A., and more when we got home. … We arrived home on a Saturday and by Thursday, he laid down in the bed—and he couldn’t get up for months,” she added.

The Fields believe the culprit behind his mysterious illness was a disgusting parasite—the rat lungworm—which they said could have been carried by a slug he accidentally consumed while enjoying a salad.

Rat lungworms is a disease that affects the brain and spinal cord, according to the Hawaiian Department of Health. In humans, it can cause a rare type of meningitis. Not everyone infected will show symptoms, however, those who do might experience severe headaches and stiffness of the neck, tingling or painful feelings in the skin or extremities, low-grade fever, nausea, and vomiting. Symptoms can last between two to eight weeks and even longer in some reported cases.

The parasite is usually found in rats which are then transmitted through slugs and snails from their feces.

“In Hawaii, these larval worms can be found in raw or undercooked snails or slugs. Sometimes people can become infected by eating raw produce that contains a small infected snail or slug, or part of one,” the health department website said.

The Fields said they didn’t eat any snails. They believe Ron contacted the infection from a salad, which they were eating every day on their vacation, reported Food Safety News.

“You know, a Caesar salad or whatever they had in the restaurants,” Ron told the news website.

Ron, who owns a construction business in Sarasota, visited many doctors and an emergency room who performed multiple tests to find out the cause of his mysterious symptoms.

“He called it burning skin pain. Then he started to have bladder problems and couldn’t urinate,” Darlene told the news website.

But no doctors were able to pinpoint the cause of his suffering. Some doctors even suggested that it was due to stress.

“They diagnosed all these silly things,” said Darlene. “We thought he was dying, and they said acid reflux, stress. It was just weird. Even after we found out what it was and told doctors, nobody had ever heard of it.”

However, one day Darlene began to speculate that the disease was caused by the parasitic worm when Darlene’s mother was flipping through TV channels and came across the words “Big Island” and “rat lungworm” on the Animal Planet network, reported the news website. Darlene then searched the internet which eventually led them to an answer.

“We diagnosed it ourselves from the internet. I called the Big Island, the hospital, the CDC, I think, trying to get hold of a doctor who had treated it to see what we could do. … I finally called an emergency room in Honolulu and got a doctor who said it was untreatable but it would go away eventually,” Darlene told the news website.

In 2017, the Hawaii Department of Health recorded 18 confirmed cases, according to Anna Koethe of the department’s communications office, reported Food Safety News.

Now at age 64, Ron still goes to work but has lost weight and agility.

“I don’t know if words can really describe (it),” he told the news website. “It’s been challenging. As far as my balance and ability to be able to work every day without [the] disability is about 90 percent.”

“It took a while to get there. I still suffer from the neuropathy from the nerve damage that happened to me, and it’s just been a real struggle with that,” he added.

The Fields said the disease had changed their lives and cost them hundreds and thousands of dollars.

“It’s changed our lives,” Darlene said. “We’ve lost hundreds of thousands of dollars. His business was really starting to thrive … and when we came back, he just couldn’t work.”