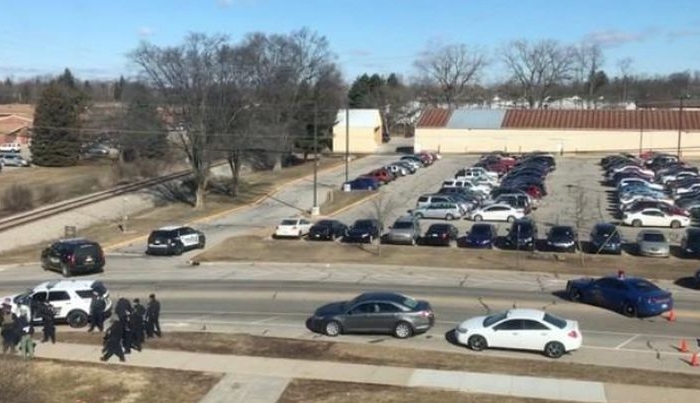 The site of shooting at Central Michigan University is seen in this picture obtained from social media, Mount Pleasant, March 2, 2018 (Grant Polmanteer/via Reuters)
US News

Update on Suspect Who Reportedly Killed Parents in Dorm

At least two people were shot dead in what authorities said was a domestic issue at a dormitory at Central Michigan University on Friday morning, March 2; police are searching for the gunman.

The two victims who were not students were found inside the residence hall at the university, located about 125 miles (200 km) northwest of Detroit, according to University Police Lieutenant Larry Klaus. He identified the suspect as 19-year-old James Eric Davis  Jr., who is originally from the Chicago area, ChicagoTribune reported.

Reports said that Davis shot and killed his parents. They were identified as Diva Davis, 47, and James Eric Davis Sr., 48, WILX-TV reported.

The report said that he shot and killed his parents a day after he went to the hospital for a drug-related offense.

Police said they were shot on the fourth floor of the Campbell Hall dorm.

An Illinois state lawmaker, Rep. Chris Welch, wrote about the elder Davis, who had been a police officer in the state. “The shooting at Central Michigan University today strikes close to home. A sad day in Bellwood and across the 7th District. My sincerest condolences go out to the family of Bellwood Police Officer James Davis Sr. and his wife who were shot and killed this morning. May they RIP,” he wrote.

Local police didn’t confirm that they were Davis’s parents.

The shooting at Central Michigan University today strikes close to home. A sad day in Bellwood and across the 7th District. My sincerest condolences go out to the family of Bellwood Police Officer James Davis Sr. and his wife who were shot and killed this morning. May they RIP. pic.twitter.com/B0cykAxFVv

“Our campus is safe,” Klaus said at a news conference on Friday.“We’re calling it a family-type domestic issue at this point.” The university said no one was injured by the gunfire, Reuters reported.

Davis had contact with college police on Thursday night and was taken to a local hospital after an apparent overdose or“bad reaction to drugs,” Klaus told reporters.

Davis was considered armed and dangerous and campus police were investigating the incident along with local and state police, according to university officials.

Klaus said Davis was seen wearing a dark hoodie following the shooting. Police found “a number of articles of clothing” as he fled the campus north along railroad tracks, Klaus said.

Police told the public not to confront Davis, and they suspected that Davis was still in the central Michigan area, according to the Chicago Tribune.

“The priority right now is the safety of those still on campus and I thank all first responders involved for their swift action,” Michigan Governor Rick Snyder wrote on Twitter. “We won’t have all the answers today, this will be an ongoing conversation but I can say that we will continue working hard to keep Michiganders safe and support these @CMUniversity students,” he added.

Central Michigan University is a four-year, public institution with more than 23,000 students.