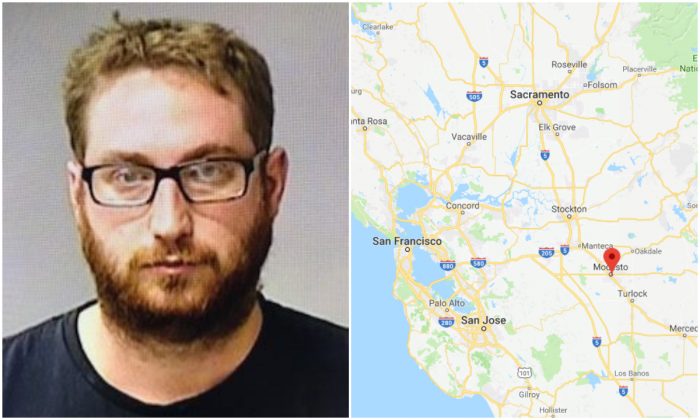 A 28-year-old in California shot his mother in the head after a dispute during which his video game headset was broken, police said.

Matthew Nicholson lived in Modesto, California, a city some 75 miles east of San Francisco. He was playing video games in his bedroom on Thursday, Jan. 11, when he got upset and started yelling, the Ceres Police Department stated in a press release. His mother, 68, went to check on him. The two got into an argument during which Nicholson broke his headset and blamed it on the mother.

He threatened to kill both the mother and his father, and went to get a gun from the home. He fired twice into a wall and then shot his mother in the head. His father was able to wrestle the gun out of Nicholson’s hand, after which Nicholson left.

He then took a car and drove to a relative’s home in nearby Riverbank, about 8 miles north of Modesto. Before he reached the home, police found his vehicle, stopped him, and arrested him without further incident.

Nicholson was taken to the Ceres Police Department for questioning and later arrested for homicide. He was then booked into the Stanislaus County Jail where he was held on Saturday without bail.

Multiple people who knew Nicholson or came in contact with him were shocked by the news.

Manuel Alejandro Gutierrez of Ceres hung out with Nicholson, though not for the past year. But he would often seen him around town and was close friends with Nicholson’s cousin.

“To be honest this came out of left field,” Gutierrez said through Facebook Messenger. “As far as I knew, he was always well mannered/tempered.”

He said Nicholson worked as a paraprofessional for an after school program “which takes a lot of patience and understanding,” he said.

Nicholson worked at Christine Sipherd Elementary School in Modesto, but left last year, Jamie Trevino, who says her kids go to the school, said in a Facebook comment.

“I’ve played at my house when he would come over. He was never livid, usually just argue with the screen as any other gamer would,” he said.

The Ceres Police Department is asking anyone with information related to the case to contact Detective Bryan Ferreira at  209-538-5616.