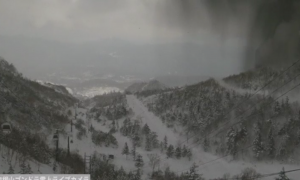 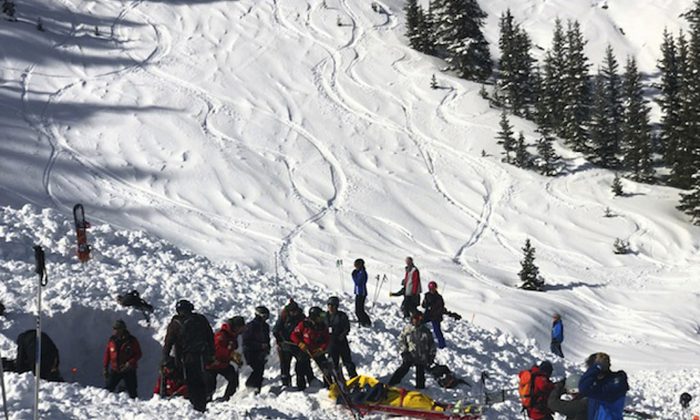 People search for victims after an avalanche buried a number of people near the highest peak of Taos Ski Valley, one of the biggest resorts in New Mexico, Jan. 17, 2019. (Morgan Timms/Taos News via AP)
US News

IDAHO FALLS, Idaho—Authorities said one person died in an avalanche that hit eastern Idaho near the Wyoming border on the afternoon of Jan. 25.

A man was overcome by the slide and the two others in the group were able to summon help. But they were not able to revive him.

Family members have identified the man as Tommy Hawkins, of Layton, Utah.

His sister Angela Spencer told the East Idaho News, that Hawkins was a former resident of Victor and a Teton High School graduate.

A GoFundMe page has been set up to support his wife and their three children with funeral expenses.

The Bonneville County Sheriff’s Office said the risk of avalanche is high right now, and backcountry travelers and recreationists should use extreme caution.

An avalanche also buried a snowmobiler in southeastern Utah and officials are still searching for him.

Madison County Sheriff Phil Fortner said another skier was injured when the avalanche occurred about 1 p.m. Jan. 25 in the Tobacco Root Mountains.

Fortner identified the man who died as Benjamin Hirsch-McShane, of San Francisco.

Benjamin Hirsch-McShane and his wife once quit their jobs and spent more than a year and a half traveling the world.

The Montana Standard reported that the skiers were part of a group of four men from Utah and California.

Alex Marienthal, of the Gallatin National Forest Avalanche Center, said the skiers were reportedly ascending a slope in a heavily treed area when the avalanche occurred. Two were carried away while the other two were reportedly able to grab onto trees and were not hurt.

The injured skier, whose name wasn’t released, was taken to a hospital in Billings.

PRISTINA, Kosovo—Kosovo’s prime minister said an avalanche has killed a senior Cabinet official while he was skiing in a southern resort.

Ramush Haradinaj wrote on Jan. 26 on Facebook that Deputy Minister of Diaspora Arian Daci was killed and Daci’s friend was injured at the Brezovica resort area, 80 kilometers (50 miles) south of Pristina.

Ilir Morina of the Environmental Protection Agency wrote on Facebook that the skiers were outside designated ski runs when they were hit by two avalanches.

Morina said agency workers found one dead and helped save the injured one.

Kosovo has had extremely cold weather in the last month.

SALT LAKE CITY—A powerful winter storm has left a trail of traffic accidents, power outages, and even an avalanche in Utah.

Little Cottonwood Canyon reopened in the morning in Jan. 21, a day after an avalanche closed the canyon and State Route 210.

A massive power outage hit 12,000 customers on the morning of Jan. 20 in parts of Draper, Bluffdale, and Lehi. Rocky Mountain Power said it restored electricity later in the day but there were some scattered outages.

A Salt Lake City International Airport spokeswoman said five flights were canceled on Jan. 20 due to the weather.

The National Weather Service said between 4 and 8 inches of snow could come to the Wasatch Front and mountainous areas could see as much as 24 inches.