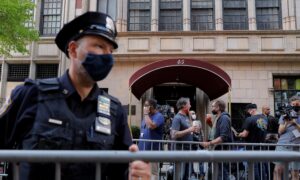 Man Killed by Police During Attempted Gun Confiscation in Maryland

Two police officers in Maryland killed a man after he refused to give up his gun earlier this month. They were serving one of Maryland’s new “red flag” protective orders.

Gary J. Willis, 61, answered his door in Ferndale with a gun in his hand, the Baltimore Sun reported on Nov. 5.

Willis put the gun down next to his door but then “became irate” when officers served him with the order. He then opened the door and picked up the gun, police told the newspaper.

“A fight ensued over the gun,” said Sgt. Jacklyn David, who is a police spokeswoman.

During the struggle, the gun went off and didn’t hit anyone. The other officer then shot and killed Willis.

“Red flag” protective orders are known as emergency risk protection orders and are initiated by family members, police, or other individuals, the Sun noted. They are served to prohibit the subject’s access to firearms when they show signs that they’re a danger.

The new “red flag” law went into effect in October.

“Under the law, family, police, mental health professionals can all ask for the protective orders to remove weapons,” said David, according to CBS Baltimore.

Michele Willis, who identified as the deceased man’s niece, said an aunt requested a protective order to remove the gun.

Michele said he “likes to speak his mind,” but she described him as a harmless person. “I’m just dumbfounded right now,” she said. “My uncle wouldn’t hurt anybody.”

“They didn’t need to do what they did,” she said of the officers.

“Family members tell me there was a fight last night that centered around the care of an elderly family member that led them to contact police. Gary Willis struggles with alcoholism. Family say he wasn’t dangerous just strongly opinionated,” wrote Joy Lepola Stewart, a Fox45 reporter.

The two officers were injured. Police haven’t released their names to the public.

Mark Pennak, who is the President of the pro-Second Amendment group Maryland Shall Issue, told Fox45 of the new law: “This has disaster written all over it.”