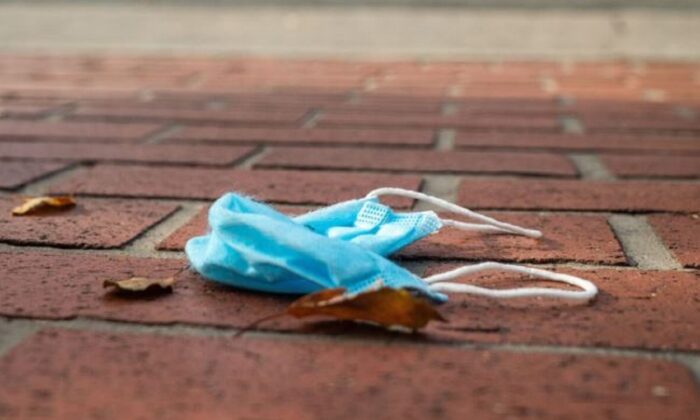 A mask lays on the sidewalk in a file photograph. (John Fredricks/The Epoch Times)
Crime and Incidents

Man Killed by Police After Stabbing Over Wearing a Mask

A man in Michigan was shot dead by police after a stabbing over wearing a mask inside a store.

Sean Ruis, 43, was inside the Quality Dairy in Windsor Township early Tuesday when an argument broke out with another customer because Ruis was not wearing a mask.

Ruis at one point pulled out a knife and stabbed a 77-year-old man, Michigan State Police said.

After being refused service because he wasn’t wearing a mask, and the subsequent stabbing, Ruis fled the scene in a vehicle.

A female deputy with the Eaton County Sheriff’s Department located the vehicle and pulled Ruis over. That’s when the fatal moment happened.

“She is retreating, ordering him to put his weapon, his knife down, and backs up. And at that time, she defends herself from being attacked with that knife, and she shoots that suspect,” Lt. Brian Oleksyk of the state police told reporters.

The Michigan State Police said in a statement that the suspect was going to use the knife to attack the deputy.

Ruis was rushed to a nearby hospital and died during surgery.

He was described as a white male from Grand Ledge.

Ruis worked for the state Department of Transportation as a technician, a spokesman told news outlets.

“The heroes on the front lines of this crisis have gone hours without taking their masks off every day—doctors, nurses, child care workers, grocery store workers. We owe it to them to wear our masks when we’re on a trip to the grocery store or pharmacy,” she said in a statement.

Masks are considered a way to stop the spread of the CCP (Chinese Communist Party) virus, which causes COVID-19. Others point to the dearth of research backing the widespread use of masks.

Another mask-related killing unfolded in the state in May, after a security guard at a Family Dollar asked a shopper to wear a face covering.

Genesee County prosecutor David Leyton said Sharmel Teague, 44, spit at the security guard, Calvin Munerlyn, when he asked her daughter to don a mask. They exited the establishment after he ordered them to do so.

Shortly thereafter, Teague’s husband and son entered the store and one shot Munerlyn in the head, prosecutors said.

Teague, her husband, and her son were arraigned on first-degree murder and other charges. The sister of one of the men was also charged with tampering with evidence and lying to police after allegedly interfering with efforts to track them down.