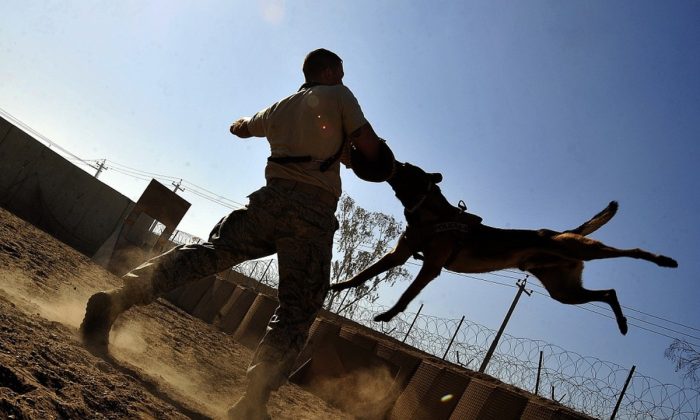 Stock image of a man being attacked by a dog in a controlled environment. (12019/Pixabay)
Crime and Incidents

A 45-year-old man in Florida was killed by a pack of dogs after being bitten more than a hundred times, according to an autopsy report released on July 5.

Melvin Olds Jr. was found behind a home, in a wooded area on Cochran Drive in the Highway Park neighborhood south of Lake Placid shortly before noon on Thursday, said the Highlands County Sheriff’s Office in a statement.

Authorities said he had been seen alive a few hours earlier.

“Independent investigations by the Highlands County Sheriff’s Office, the District 10 Medical Examiner and the Florida Fish and Wildlife Conservation Commission (FWC) have determined that the preliminary cause of death for 45-year-old Melvin Olds Jr. is injuries suffered during an animal attack,” said the Sheriff’s office.

According to the statement, Dr. Stephen Nelson, the District 10 Medical Examiner, checked Melvin on the scene and did not see any other injuries other than dog bites. The autopsy also confirmed this.

The authorities said they have captured six dogs in the area and their bite size matches those found on Melvin’s body. DNA from the captured dogs will be matched to DNA collected from the victim’s wounds to see if those dogs were involved in the attack.

“While we may have the dogs that were responsible for this horrible tragedy, we won’t know for sure for a while,” Sheriff Paul Blackman said.

“I want to encourage residents of Highway Park and the surrounding area to be on the lookout for any loose dogs, especially those that seem aggressive. We don’t want anyone else to be injured.”

Authorities have requested people to contact the Sheriff’s office at 863-402-7200 if they see unattended dogs in the area.

In a similar case, a woman and a dog in Canada were allegedly attacked by four pit bulls while on a walk last month.

Marissa Gautreau was walking her roommate’s golden retriever in Calgary on June 21 when she said four pit bulls attacked them until they were bleeding, reported Global News.

“The next thing you know I’m kind of starfishing our dog on the ground while the four pit bulls are biting us from every angle,” she said. Gautreau told Global News the attack happened on her front lawn.

#Calgary — “The next thing you know I’m kind of starfishing our dog on the ground while the four pit bulls are biting us from every angle,” Gautreau said. https://t.co/rOhozhfrFS

Gautreau said the dogs eventually left after two people came to their aid.

“A car pulls up. Two people get out and they start beating on the dogs with two lacrosse sticks and dogs just don’t give up, and then another guy stops and he’s kicking the dogs, and then finally the dogs just gave up and I was sitting here on my front lawn just bleeding everywhere,” said Gautreau.

Gautreau suffered minor injuries while Copper, the 1.5-year-old dog, had to get stitches and staples, the outlet reported.

Gautreau’s roommate, Danielle Lewis, said the dogs were “still running wild” by the time police arrived and the owners were nowhere in sight, according to IB Times.

“We were lucky the police came as quick as they did and it could have been a lot worse than what it was,” Lewis, who is Copper’s owner, told Global News.

Lewis said that it is a “very populated area” and after the incident, she feels unprotected and helpless.

“There’s always people walking their dogs through these streets so it’s just a matter of time before something like this happens again,” she told Global News.

Detective Shawn Rupchan told City News that the pit bull’s owner is facing multiple fines. “Bylaw attended and they classified it a level three offense and tickets were issued to the dog owner,” Rupchan said.