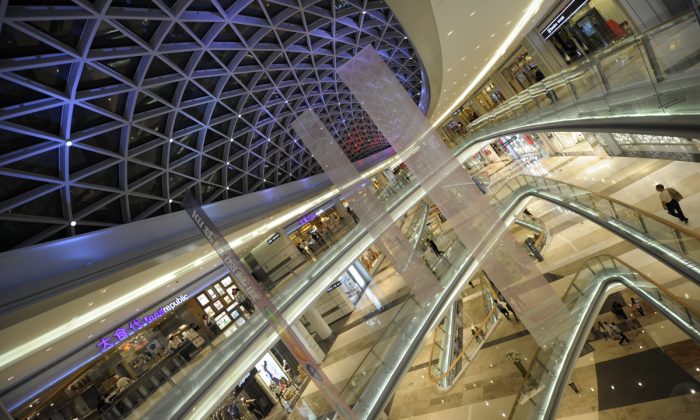 As a one-year-old girl was walking around in a mall, a man kicked her into the air, then threatened the child’s grandmother, according local online news outlet Shenzhen Life.

The toddler did not suffer major injuries, and was left with bruising, according to the Aug. 29 report.

The three were in a mall in Shenzhen City of China’s Guangdong Province on Aug. 28. Police are still searching for the suspect.

Security camera footage from the mall shows a man wearing a gray and white striped shirt and walking with a shoulder bag through the mall at about 5:00 p.m. The young girl is standing next to a large white pillar, while her grandmother stands a short distance behind her, keeping an eye on the child.

As the man walks by, without warning, he suddenly kicks the girl, hard enough to throw her into the air before she falls back down onto the tile floor. He looks down at her for a moment before continuing on his way, but the grandmother comes forward.

As she runs next to the child, it appears she says something to the man, who then turns around and approaches her. As he walks towards her, she turns and leans over to pick up the girl.

The child reportedly wouldn’t stop crying after being kicked. The grandmother attempted to speak with the man about his actions, but instead he threatened her, the report said. In response, the woman left with the child.

Afterwards, the grandmother felt fully responsible for what happened, according to Shenzhen Life, as she was in charge of the child’s safety.

The report said the police are investigating the incident.

One of the most popular comments about the incident on Weibo, China’s version of Twitter, said the standard punishment wouldn’t be enough.

“There’s something wrong with this person, the child was squatting by the pillar, he passed by and kicks the child into the air. This person can’t only be detained for 15 days,” wrote user “Big Halloween Pumpkin waiyin.”

“Thank goodness the child was alright, the baby was completely kicked into the air!” wrote Weibo user “Zuozuo’s Legendary Life.” “If it was the back of her head that hit the ground, I dare not think about it, this is intentional harm and [you] should sue him!”

Another popular comment, written by “boo Ying” said, “[This is] too evil, I guess he is at the end of a terminal disease so he hates children who have a long life ahead of them.”

Other users made more extreme comments, saying the man should be jailed for at least five years, or some calling for the death sentence.