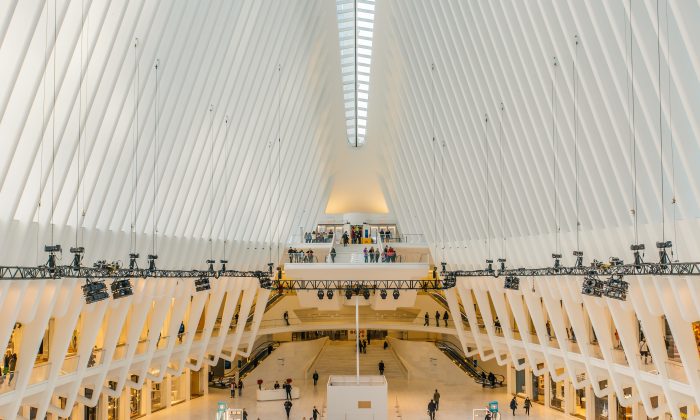 A man was seriously injured after jumping from a third floor balcony of the Oculus at the World Trade Center Transportation Hub Tuesday, Aug. 1, in the afternoon.

Surveillance video of the incident shows the man crouching before he jumps over the rail in what appears to be a suicide attempt, the New York Post reports.

He was rushed to Bellevue Hospital Center in serious condition, sources said, but expected to survive.

The man, whose name has not yet been released, was in his 40s.

After the man was removed, police cordoned off an area of the floor around where he was found.

Rhonda Galvo, who works at London Jewelers in the mall, told AM New York that she was walking toward the store when she saw the man falling. She said he landed on his arm.

“It made a huge noise, a thud, loud enough that my co-workers could hear from the back of the store,” she told AM New York. “It felt like everything in the building stopped in that moment.”

Wilson Spencer, who works in sales for the Blue Man Group at the Oculus, heard the man jump.

“There was a scream and a splat and a body,” he told the New York Daily News. “I wish I could unhear that sound. Like a wet beanbag hitting the floor.”

Witnesses told the New York Post there was chaos after the the man fell. One witness told the paper people started screaming and ran to the man to try to help him.

Another unnamed witness, who called the scene “straight panic,” said that people were running and screaming when she got there.