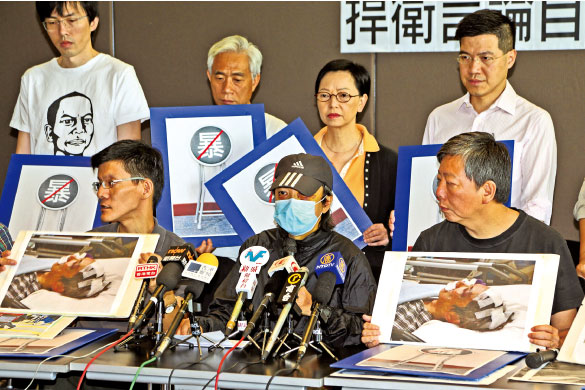 A man suspected of beating an elderly man with a chair was ordered into a Hong Kong prison on Monday. Prior to that, he admitted that he was working under the aegis of the Hong Kong Youth Care Association, a front group associated with an extralegal agency run by the Chinese Communist Party.

Guan Ziang, 39, was charged for being one of four men to assault a 53-year-old Mr. Chen on June 6, when the latter was about to attend a memorial for Li Wangyang, a pro-democracy activist jailed for 21 years who died in custody on June 6, 2012.

The memorial was held at a pedestrian zone at Mong Kok, a bustling fashion and dining area in the center of Hong Kong. Earlier in the evening, Mr. Chen, whose first name was not disclosed, got involved in a heated arguments with a number of individuals in the street. As Chen was walking toward the memorial waiting for it to begin, four men ambushed him.

One of the men hit Chen on the head with a folded stool repeatedly for a full minute and then fled as Chen fell to the ground with blood pouring from his head. Chen was sent to the hospital and received ten stitches.

In response to police investigations, the suspect, Guan, claimed to be the manager of a beer company and the shareholder of an oil and food corporation. He said his employer was the chairman of the Hong Kong Youth Care Association Ltd., a group that has harassed and held up hate propaganda banners targeting practitioners of Falun Gong, a spiritual discipline persecuted in China.

The HKYCA is known around the city as the group that hangs large numbers of banners attacking Falun Gong; recently the Hong Kong authorities cracked down on the group’s activities, citing them for violating local laws. The HKYCA shares the same office building and staff as the 610 Office, an Party-run extralegal taskforce set up to carry out the persecute against Falun Gong in China, according to an investigation by Next Magazine. The head of the HKYCA also holds a number of official and Party posts in China.

Guan’s request for bail was denied by the Kowloon City Magistrate; the prosecutor said that the three other suspects remain at large.

With translation by Frank Fang.