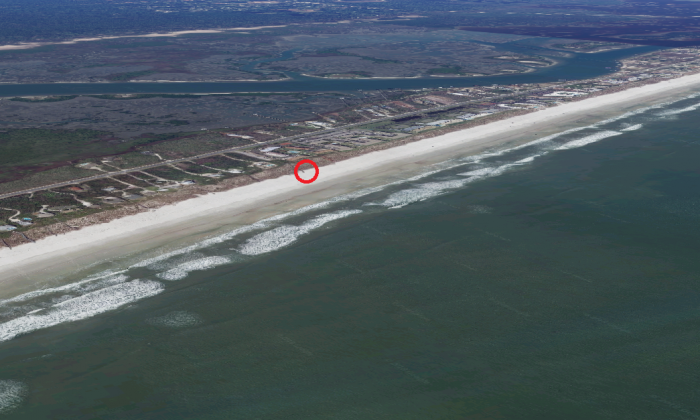 The approximate location where Lee Goggin was buried by a collapsed tunnel he dug in sand dunes at Crescent Beach, south of Jacksonville, Fla., on Jan. 28, 2018. (Screenshot via Google Maps)
US News

Lee Goggin, 35, was vacationing with his family at Crescent Beach, south of Jacksonville, Florida, when his decision to dig a tunnel on a beach put him in a hospital, fighting for life.

The incident happened on Sunday, Jan. 28, when Goggin, a father of three and personal trainer from the Dallas area, was digging in the sand dunes with his hands.

His wife, Courtney, was taking a video at the time when the tunnel suddenly collapsed, Miami Herald reported.

The family tried to dig the man out and after about a minute, they decided to call 911.

This is where we believe a man became trapped underneath the sand after he dug a tunnel in the dune. You can see the dune is roughed up and there are lots of foot prints. @ActionNewsJax pic.twitter.com/R1Tmo5zG0v

A father, who's on vacation in FL with family, is now fighting for his life after he was buried alive in the sand dunes in St. Augustine. Family members are calling it a freak accident. I'm working on this story for 5 on @ActionNewsJax. pic.twitter.com/EJNpQIalrQ

St. Johns County Fire Rescue was alerted to the situation at about 1:40 p.m., it stated on Facebook. Upon arrival, the crew removed some 2-3 feet of sand before they could pull Goggin out from under the sand and perform procedures to counter a cardiac arrest.

Goggin was then transported about 12 miles to the Flagler Hospital in St. Augustine. He was in critical condition.

According to a GoFundMe page set up for Goggin on Sunday, he had a heartbeat but was not breathing on his own.

“At 3:30 p.m. they [will] begin the reboot process which will begin to warm his body,” his sister wrote on Facebook on Monday. “We continue to ask for prayers for strength for Lee’s body to fight harder than he ever has and come back. We know with our Awesome God that this is possible and it will happen. We serve a Mighty God that will never leave us.”

Collapsing holes and tunnels dug into beach sand can be deadly, though such incidents are rare. In July, a Texas woman was found dead in a collapsed hole on a beach in Ocean City, Maryland. Investigators said somebody else dug the hole that contributed to the woman’s death. A medical examiner ruled her death an accident, WTOP reported.