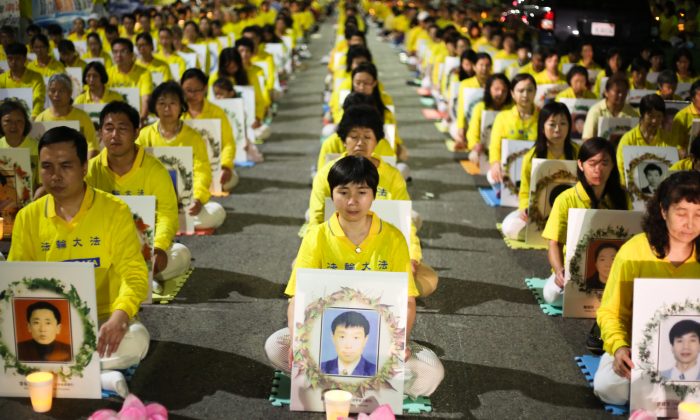 Falun Gong practitioners hold a candlelight vigil in front of the Chinese Consulate in Los Angeles on Oct. 15, 2105, for those who have died during the 16 year persecution in China. They demand that Jiang Zemin be brought to justice. (Benjamin Chasteen/Epoch Times)
China Human Rights

A man in Anhui Province, China has died under mysterious circumstances after a year of being imprisoned for his spiritual beliefs.

Ye Guangping is a practitioner of Falun Dafa, also known as Falun Gong, an ancient self-improvement practice that involves meditation and living according to the principles of truthfulness, compassion, and tolerance. The practice’s benefits to physical and mental health led to its widespread popularity, with more than 70 million adherents in China by 1999, according to a state survey. Practitioners say their numbers reached more than 100 million.

But Falun Gong’s popularity was perceived as a threat to the Chinese Communist Party’s authoritarian ideology, and the Chinese regime launched a nationwide persecution of Falun Gong practitioners in 1999. The official press office for Falun Gong, the Falun Dafa Information Center, estimates that millions of Falun Gong adherents have been arrested and detained since the persecution started, often enduring torture and abuse while imprisoned.

Ye was arrested on Sept. 7, 2015, at 7 a.m. Local police and public security officers forcibly entered his home and detained him, along with his wife and daughter, at the Lu’an City Detention Center.

Months later, Ye was sentenced to four years in prison for his continued faith in practicing Falun Gong. In Oct. 2016, he was taken to Anhui Province Suzhou City Number Three Prison.

This prison has long been known to torture and abuse Falun Gong practitioners, even to death, according to Minghui.org, a U.S.-based website that tracks the persecution in China. Many who have been imprisoned there report the prison guards’ mistreatment. Prisoners are given only one steamed bun per meal, yet forced to do military-type exercises daily. Practitioners who try to do the Falun Gong exercise movements are handcuffed and beaten, including with electric batons. They are also forced to undergo brainwashing sessions daily, when they are forced to watch and read videos and books with propaganda against the practice. This form of torture is meant to coerce them into giving up their faith. If practitioners refuse, they are often beaten with electric batons for long periods of time.

On Oct. 8, Ye’s family received a call from prison saying he fainted from high blood pressure while doing manual labor.

Later, the hospital told the family that he had suffered from a brain hemorrhage and entered into a coma.

At noon on Oct. 13, the hospital informed the family that his heart stopped beating and declared him dead.

Family members reported to Minghui.org that the entire back of his body had purple discoloring. They are concerned that Ye was actually tortured to death.

Ye had been healthy prior to imprisonment and did not have any blood pressure problems. The prison asked for Ye’s body to be cremated immediately, a tactic commonly used to destroy physical evidence of torture or abuse on the prisoner’s body.