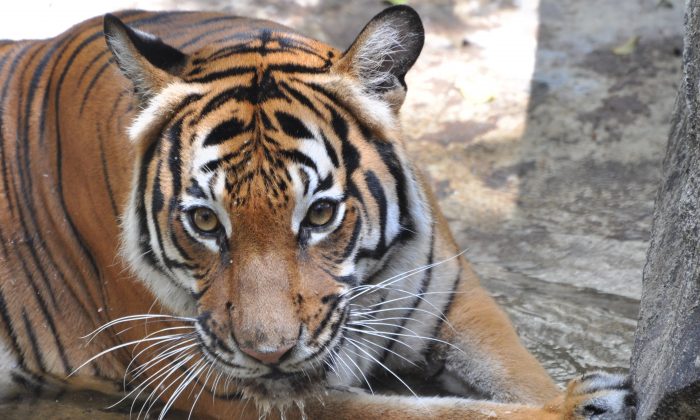 A Malayan tiger has a drink in this 2011 file photo. (wildhog1977/Flikr)
Crime and Incidents

A man who worked at the Naples Zoo in Florida was hospitalized with serious injuries on Wednesday when a tiger bit his arm after he entered a restricted area and reached into the animal’s enclosure, officials said.

A sheriff’s deputy was “forced to shoot” the critically endangered Malayan tiger on Wednesday evening after the man, who is in his 20s, was bitten by the animal, the Collier County Sheriff’s Office said in a Facebook post.

”Preliminary information indicates that the man was either petting or feeding the animal, both of which are unauthorized and dangerous activities,” the office said. “Initial reports indicate that the tiger grabbed the man’s arm and pulled it into the enclosure after the the man traversed an initial fence barrier and put his arm through the fencing of the tiger enclosure.”

The man, a member of a a third-party cleaning service contracted by the zoo, was seriously injured and was transported to an area hospital by Collier County EMS as a trauma alert, the sheriff’s office said, noting that the cleaning company is responsible for cleaning restrooms and the gift shop, not animal enclosures.

Lee Memorial Hospital Emergency Department confirmed to ABC News that it had received a patient via medical helicopter from Naples with injuries consistent with a tiger attack.

Naples Zoo said that the 8-year-old tiger named Eko, which it had acquired in December 2019 from the Woodland Park Zoo in Seattle, died after being shot.

The zoo on its website says it will be closed on Thursday, Dec. 30 and will reopen on Friday, Dec. 31.

Malayan tigers are classified as a critically endangered species, according to the International Union for Conservation of Nature’s Red List of Threatened Species. The World Wildlife Fund says there are currently fewer than 200 of the animals in the wild, and that development, agricultural expansion, and hunting are to blame for the decline in loss of habitat.

“Eko is a great ambassador for his species. When guests see him, we hope they fall in love and want to learn how they can do their part to save his cousins in the wild,” Naples Zoo says on its website.

Its website says the tigers are native to the forests and mangrove swamps in Malaysia and face threats such as habitat loss, poaching for their bones and skin, depletion of their prey, and tiger-human conflict.

The Epoch Times has contacted Naples Zoo for additional comment.