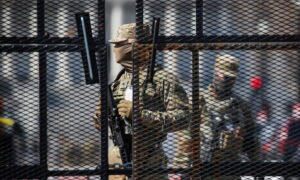 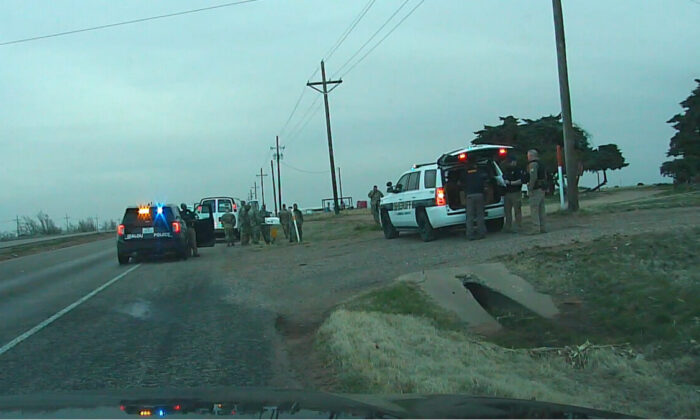 Harris ordered the Guardsmen out of their vehicles at gunpoint and alerted police that he thought the people in the vans had kidnapped a woman and a child.

No Guardsmen were injured. None of them were armed.

Harris was arrested for aggravated assault with a deadly weapon, unlawful restraint, unlawful carrying of a weapon, impersonating a public servant, and interfering with Texas military forces. It wasn’t clear whether he had retained a lawyer.

“Mr. Harris appeared to be mentally disturbed. This was a very dangerous situation since the suspect was standing in the midst of the unarmed Guardsman with a loaded weapon when the Idalou Officers arrived on scene. We are grateful that the officers were able to take him into custody without any of the Guardsmen, the officers or the suspect getting hurt,” Idalou Police Chief Eric Williams told The Epoch Times in an emailed statement.

Williams added to a local station that he “was very thankful that it did not turn into major bloodshed.”

“This man was in the midst, within arm’s length of all those National Guardsmen—and they’re unarmed,” he said.

The police chief recommended anyone who believes they’re being followed call 911, saying there’s no harm in doing so.

Major General Tracy Norris, Adjutant General of Texas, told The Epoch Times via email: “We hope that the people of Texas find comfort in knowing that we are unwavering in our dedication to serving our fellow Texans and will continue to work together safely as we fight this virus.”

Homeland Security Investigations is assisting in the probe into what happened.

Guardsmen are helping in numerous states to distribute and administer COVID-19 vaccines.