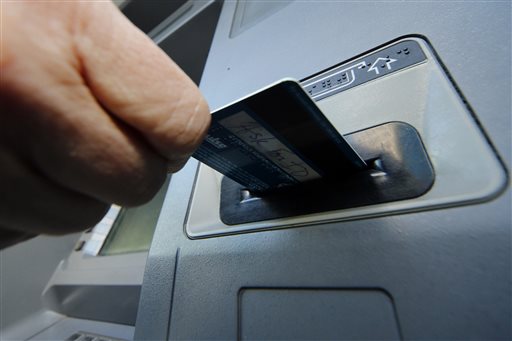 A person inserts a debit card into an ATM machine in Pittsburgh in this file photo. (AP Photo/Gene J. Puskar, File)
Crime and Incidents

PHILADELPHIA —Authorities say a man who was robbed at gunpoint after withdrawing money from a drive-up ATM in Philadelphia later struck the alleged perpetrator with his car.

Philly.com reports that police say the suspect approached the vehicle with a gun Monday, grabbed the cash and took off.

Police say the driver sped off. He later realized his card was still in the machine, so he returned to look for it.

Investigators say that’s when the robber popped up again with a knife. Police say the driver hit the thief with his car, tossing him onto the street. They say the driver went through the man’s pockets, found his money and drove home.

The man who was struck was hospitalized and faces robbery charges. Police Lt. Dennis Rosenbaum says he doesn’t expect charges against the driver.