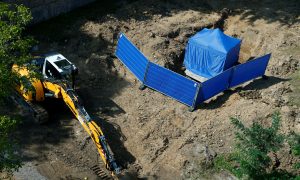 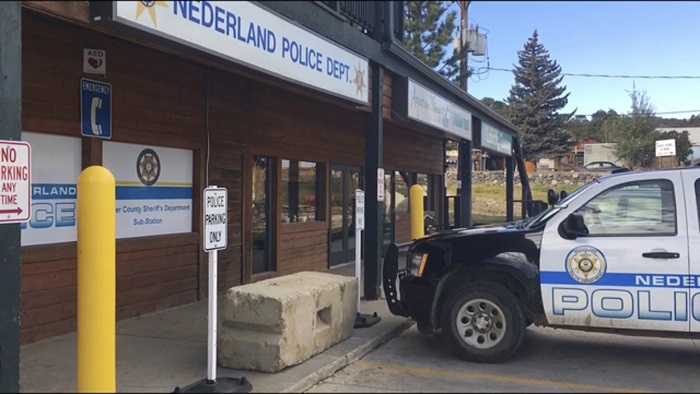 The exterior of the police station in Nederland, Colo. where David Ansberry left a homemade bomb that failed to detonate, on Jan. 25, 2019 .(Sadie Gurman/AP Photo/, File)
US News

Man Gets 27 Years for Failed Bomb Outside Police Station

DENVER—A former hippie who left a homemade bomb outside the police station of a Colorado mountain town was sentenced to 27 years in prison on Jan. 25, after a judge found it was an act of terrorism intended to avenge the killing of a friend by the town marshal in 1971 even though it never exploded.

David Ansberry pleaded guilty to leaving the device containing the unstable chemical compound HMDT, a peroxide-based compound that has been used by al Qaida terrorists, in a duffel bag outside the station in a strip mall in Nederland on Oct. 11, 2016. U.S. District Judge Christine Arguello said the device was not a hoax and people could have died had Ansberry been successful in his attempts to detonate it remotely using a cellphone.

“It was fortuitous that that bomb did not go off,” said Arguello, who said that apparently the compound had degraded, losing potency.

The sentence was the minimum that the 67-year-old could receive after Arguello sided with the government in treating the crime as terrorism, which dramatically increased the sentencing range. Ansberry’s lawyers had argued that he should only face up to over 2 years in prison, about the time he has already served since his arrest. Defense lawyer Abraham Hutt said the bomb did not even damage the cement after the bomb squad fired a high energy slug into it.

Government experts earlier testified that the blast tore apart sandbags set up to send energy waves from the explosion upward and shattered the glass jar containing the HMDT, but it failed to ignite a bag full of crushed hexamine camping fuel tablets attached by another wire to the device.

Ansberry was spotted on surveillance video when he bought the phones he used for the device and was easily recognizable because he was only 3 feet 6 inches tall and using crutches because of the brittle bone disease he has suffered from since birth. Ansberry, now in a wheelchair, was arrested a few days later in Chicago on a flight layover.

Based on Ansberry’s comments before the bomb was left, including in his journal, Arguello was convinced Ansberry hoped to detonate the bomb to seek retaliation for the fatal shooting of friend Guy Goughner.

Ansberry denied he was seeking retaliation against the government, the basis of the terrorism finding, saying he was trying to draw attention to police shootings generally. In a written statement to the court that mentioned the fatal shootings of students at Kent State and Jackson State in 1970 and the 2014 shooting of Michael Brown in Ferguson, Missouri, Ansberry said he designed the device, selected its placement in the strip mall—also home to an alternative outdoor-learning school, a diner and other businesses—and time of detonation to ensure that no one was injured and to only cause limited property damage.

He reiterated that message in court and warned against abusing the word terrorist. He did not apologize for the fear that the device caused in the laid-back town despite its failure.

Police Detective Darragh O’Nuallain, who grew up amid terrorist attacks in Ireland, was the first to find the bag two hours after the last detonation attempt when he arrived for work. While at first he thought the bag was lost property found along a trail near town, he said he recognized the threat once he looked inside.

Fearing for the children who were about to arrive for school, the father thought about putting it in his car and driving it out of town but then worried he might be caught in traffic and hurt others.

He was initially treated as a possible suspect and eventually diagnosed with PTSD. He cannot talk about the school next to the police station without becoming emotional.

“We don’t deserve to be blown off the face of the earth because he has some political grudge,” he said of local police.