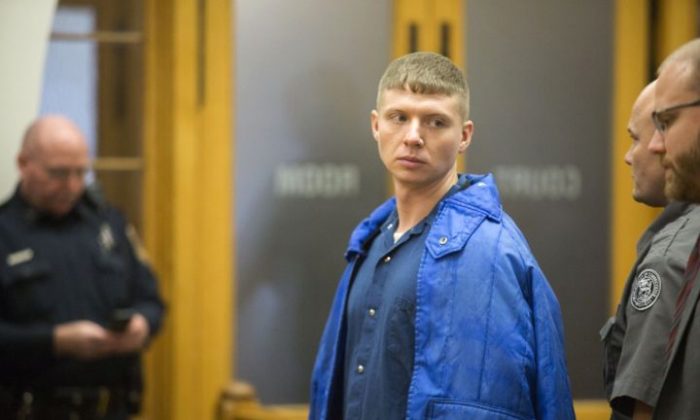 Sean Phillips receives his sentencing in the death of his daughter at the Mason County Courthouse in Ludington, Mich., on Friday, Dec. 9, 2016. Phillips convicted of second-degree murder in the disappearance of his 4-month-old daughter was sentenced to 19 to 45 years in prison. (Emily Brouwer/Muskegon Chronicle via AP)
US

A northern Michigan man convicted of second-degree murder in the disappearance of his 4-month-old daughter is not an “an evil person,” a judge said Friday in sentencing him to 19 to 45 years in prison.

A jury deliberated 2½ days in October before finding Sean Phillips guilty of killing Katherine Phillips, known as “Baby Kate.” The girl disappeared five years ago in the Ludington area about 80 miles northwest of Grand Rapids, but her body has never been found.

“The one thing I did find and do believe about you, Mr. Phillips, is that you’re not an evil person,” Judge Peter Wadel said Friday. “I didn’t find anything in your history that shows you’re an aggressive person, a predatory person.”

Wadel said he did not believe Phillips and Kate’s mother, Ariel Courtland, were fit to be parents, but while Courtland stepped up to the responsibility, Phillips did not.

Wadel also said he could not imagine Phillips intended to kill Kate the day she disappeared.

“I see a young man of great immaturity … that was the state you were in at the time,” Wadel said.

Prosecutors said Phillips had a turbulent relationship with Courtland and didn’t want the baby.

Assistant Attorney General Donna Pendergast had asked Wadel for a sentence of 40 to 75 years.

“He made the decision to eliminate the life of a human being … a baby who couldn’t stand up or fight back,” Pendergast said.

Neither Phillips not Courtland made statements at the sentencing hearing. Phillips also did not testify during his 15-day trial. His lawyer has said that there wasn’t proof beyond a reasonable doubt that Kate was killed.

The sentence will run concurrent with the 10- to 15-year sentence the 27-year-old Phillips already was serving for unlawful imprisonment in Kate’s disappearance.