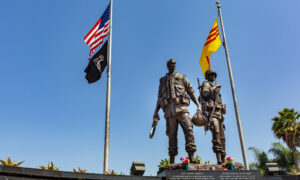 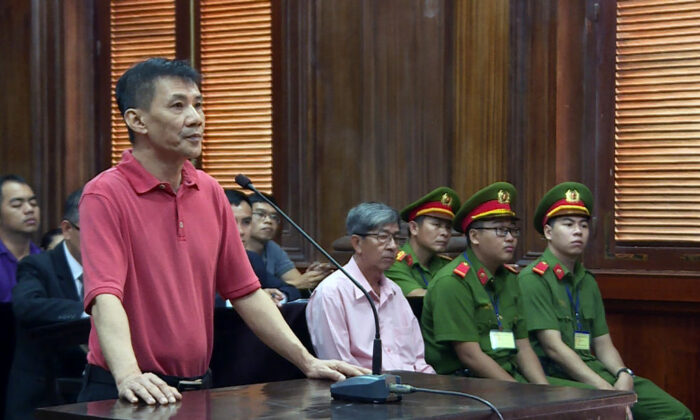 An Orange County man has been freed unexpectedly and returned home to California after spending more than two years in a Vietnamese prison.

In July 2018, U.S. citizen Michael Nguyen was traveling in Vietnam when he was forcefully taken into custody.

“I was essentially kidnapped, myself and three others, taken off a bus. No reason was given to me. No credentials were presented to me. I was blindfolded, handcuffed, and put into a car by people in civilian clothes,” Nguyen said in a prepared statement during an Oct. 28 press call.

After nearly 2.5 years in detention and limited interaction with the outside world, Nguyen, 56, is finally reunited with his wife and four daughters in Orange County on Oct. 22.

Rep. Katie Porter (D-Calif.), who hosted the press call, said the only reason Vietnamese officials gave for his release was that it was a “humanitarian gesture.”

“Maybe that’s the real story. It could be a pretext for any number of things. I’m not going to speculate,” she said.

Nguyen said the Vietnamese leaders’ decision to give back his freedom also took him by surprise.

“Even my release was completely secret to me until I was at the airport in Saigon,” he said.

Nguyen, a devout Catholic who ran a printing shop in Orange County, was originally detained in Vietnam for months without formal charges.

“The first two months, I had no communication with my family at all. I knew nothing of how they were doing, of their health, or of their lives,” he said.

“After that, I would get letters from my family about once every five weeks or so, yet nothing was private. What was written in those letters was first read by my jailers. For 11 months, I had no access to lawyers.”

At one point, a female relative in Vietnam was attacked in the street after visiting Nguyen in a temporary detention facility. One of her legs was broken in the incident, and she was so afraid that she kept the assault secret for almost a month, according to a website that tracks human rights violations in Vietnam.

Nguyen’s case was first championed by former Republican Reps. Ed Royce and Mimi Walters. Royce, from Fullerton, retired last year, and Walters was defeated by Porter in the 2018 midterm election.

In February 2019, Porter brought Nguyen’s wife, Helen, a surgical nurse, as a guest to the State of the Union address. Later that month, ahead of President Trump’s visit to Vietnam, Porter led a bipartisan group of congressmembers in sending a letter to the president, calling for him to “prioritize the swift and fair resolution of Mr. Nguyen’s case.”

But it was Nguyen’s own family, including his brother-in-law Mark Roberts, who made the greatest effort and sacrifice to bring him home, said Porter.

Nguyen was put on trial in June 2019. After four hours, he was convicted of “subversion for allegedly planning to incite protests and attack government offices,” according to the 88 Project, an organization dedicated to free speech in Vietnam. He was sentenced to 12 years in prison.

However, his family said he had not been involved in any activism activities and had visited Vietnam many times in the past without incident, according to the organization.

Nguyen attempted to appeal his case in Vietnam, but his conviction was upheld at another short trial in November 2019.

“I had no opportunity to defend myself. Even at the court, they told me I could explain myself, but when I started to speak, they stopped me. They silenced me.”

Porter said that on Oct. 21, Nguyen was suddenly transported to Korea, where he was able to contact his family. He then returned home to Orange County, and was given time to reunite with family and recover before his homecoming was announced.

In July 2019, Helen Nguyen testified about her husband’s case in front of the House Foreign Affairs Subcommittee on Asia, the Pacific, and Nonproliferation. Her story was heard by Subcommittee Chairman Rep. Brad Sherman (D-Calif.) and ranking member Rep. Ted Yoho (R-Fla.), who both joined Porter on the Oct. 28 press call to welcome Nguyen home.

“Helen and her four daughters fought so hard to bring Michael home, and no matter how dark the situation seemed, they never gave up on securing his release,” said Lowenthal.

Rep. Lou Correa (D-Calif.) said his own chief of staff, Tammy Tran, was also arrested in Vietnam a few years ago without cause. After being detained for two days, she was deported.

Correa said that while he was happy Nguyen was home, he still felt sad that “the Vietnamese government continues to violate human rights, religious freedom, not only of Vietnamese citizens, but of American citizens.”

Sherman said, “If Vietnam is going to benefit from its relationship with the United States geopolitically and economically, the first step was to release Michael, but there are many, many more steps to take.”