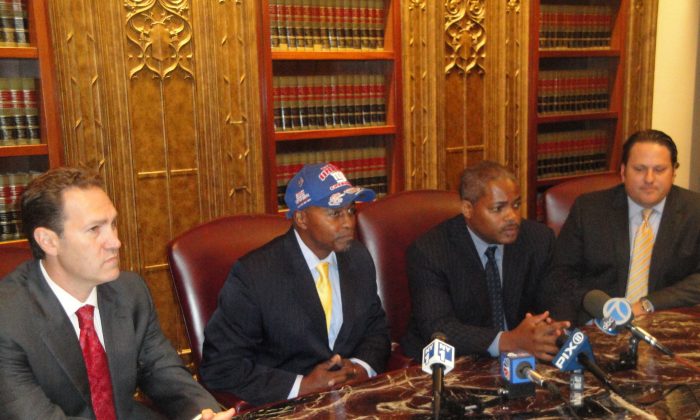 Man Found Innocent After 14 Years in Prison for Rape Charge

NEW YORK—A 54-year-old man, who spent almost 30 years of his life labeled as a sex offender and who served 14 years in prison, was exonerated by a Supreme Court Justice in July.

Johnnie O’Neal was 24 years old when he was charged with raping a woman who lived in his building—Frederick Douglass Houses on the Upper West Side.

She was one of three women that had reported being raped in the vicinity of the housing project around the same period of time. All three women had said the man who raped them wore a black leather jacket and was carrying a “007” knife.

In her testimony, one of the victims said that O’Neal had pulled a knife on her, taken her jewelry and money, forced her to go on to the roof of Frederick Douglass Houses and then raped her.

The woman also said that she did not know O’Neal prior to the attack, and that she had only lived in the housing project three years. A reinvestigation almost two decades later showed that the woman had lived in the building for six years at the time of the rape.

O’Neal and five family members had said he was at home with family watching TV at the time of the rape.

At the time of his trial, O’Neal maintained his innocence, and told his lawyer to turn down a two-year plea deal that would have required him to plead guilty to a lesser charge.

O’Neal said, he told his lawyer, “‘Listen man, I don’t want to hear it.’ And that was the beginning of my nightmare,” O’Neal said.

O’Neal was sentenced to 10 to 20 years in prison, and labeled a class three sex offender—the worst class of sex offender. He served 13 years and 9 months in prison.

During his prison term, he started a letter-writing campaign, reaching out to people to help him prove his innocence. He said it was difficult to get people to respond because he was in prison.

O’Neal didn’t want his mother to die before he had managed to prove his innocence.

“She had to wear the same stigma that I wore. ‘That lady’s son is a rapist.’ That was one of the driving things that made me want to continue to fight,” O’Neal said.

Parole required O’Neal to go back to prison two more times. Without the rape conviction, it was unlikely O’Neal would have been put in prison for the other two offences, a managing partner of the Cochran Firm, Derek Sells said.

When the Legal Aid Society and the New York District Attorney’s Office began reinvestigating O’Neal’s case five years ago, they found that some evidence had been withheld during his trial.

A crucial piece of evidence uncovered during the reinvestigation was that one victim had identified O’Neal from a photo array. She said she knew O’Neal from her building and that he was not the rapist.

In January 2012, the DA’s office interviewed the woman who had identified O’Neal as the rapist. She admitted to investigators that she had known O’Neal prior to the rape. This was significant because during the trial O’Neal said he and the woman had grown up together in the same building, but the woman had claimed she had only lived in Frederick Douglass Houses for three years.

O’Neal had also received a letter from Daniel Riveria in January 2007. Riveria knew O’Neal because he had also grown up in the same building. His letter said that Gregory Smith had admitted committing the rape.

Smith is now dead, but his prison records showed he was not in prison at the time each of the rapes occurred.

O’Neal and his legal counsel are preparing a lawsuit to seek reparation for the suffering he has endured.

“Money is not an issue. Justice is what I am here for today,” O’Neal said, at a press conference at The Cochran Firm’s Offices on Broadway in Lower Manhattan on Thursday, Aug. 15.