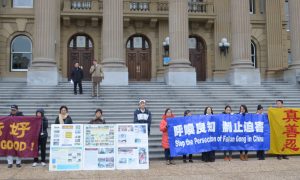 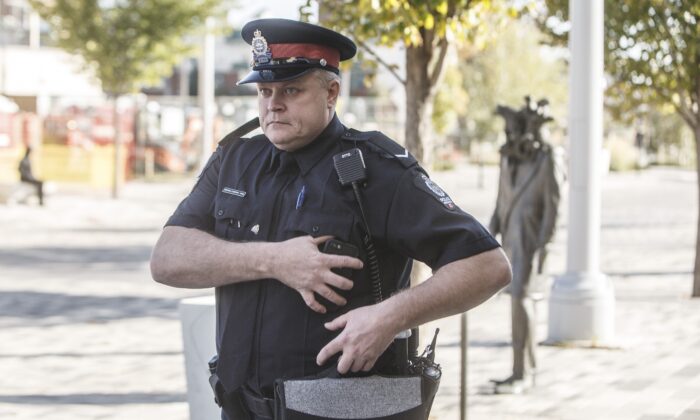 Const. Mike Chernyk leaves after testifying in the Abdulahi Hasan Sharif trial in Edmonton, Alta., on Oct. 3, 2019. Sharif, 32, has been found guilty of attempting to murder Chernyk as well as four pedestrians he hit with a van during a police chase in the city's downtown. (THE CANADIAN PRESS/Jason Franson)
Canada

EDMONTON—A man who struck a police officer with a car before stabbing him multiple times outside an Edmonton football game has been found guilty of attempted murder.

Jurors have also convicted Abdulahi Hasan Sharif of attempting to murder four pedestrians he hit with a van during a police chase in the city’s downtown.

Sharif, 32, has also been found guilty of aggravated assault against the officer, criminal flight causing bodily harm, and dangerous driving.

The three-week trial heard from about 40 Crown witnesses. Sharif, who was not represented by a lawyer, declined to call any witnesses and did not testify in his own defence.

During the trial, Const. Mike Chernyk testified that he was on traffic duty outside an Edmonton Eskimos football game when he was struck by a car. He next remembered a man on top of him, stabbing him in the head with a knife.

A woman and her boyfriend who were walking their dogs near the stadium said they heard a car rev its engine before it rammed into a barricade and the police officer.

It’s alleged that after attacking the officer, Sharif struck and injured four pedestrians as he drove a speeding U-Haul van through Edmonton’s downtown.

The four told court about their memories of being hit and how they coped with broken bones, anxiety and depression.

The jury also heard from an undercover police officer who testified that Sharif detailed the attack in a holding cell the next morning.

“Mr. Sharif advised that he did something really bad … that last night was like a dream,” said the Mountie.

He said Sharif went on to detail the attack on Chernyk and how, as he fled from police in the van, he hit several pedestrians.

The Crown argued during its closing statement Wednesday that Sharif went to extraordinary lengths to cause as much chaos and destruction as possible.

A lawyer appointed by the court to help Sharif urged jurors to consider whether he deliberately hit the pedestrians.