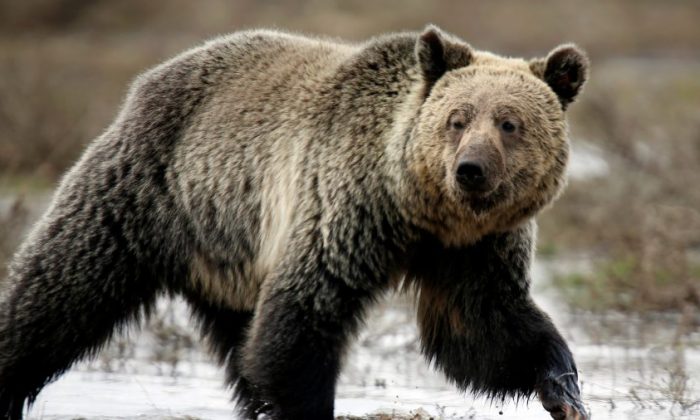 A grizzly bear roams through the Hayden Valley in Yellowstone National Park in Wyoming, on May 18, 2014. (Reuters/Jim Urquhart/File Photo)
US News

A 30-year-old man who was found eaten by a bear in September 2018 died first from a methamphetamine overdose, an autopsy revealed.

William Lee Hill Jr. died from “accidental methamphetamine intoxication” before his remains were scavenged by a bear, Great Smoky Mountains National Park officials said in a press release on Feb. 4. Hill and a friend were at the park to illegally forage for ginseng, an herb that can fetch high prices.

When Hill’s body was found off the trail about 2 miles north of Cades Cove, park officials found a bear feeding off his body.

The bear was euthanized a few days later despite officials not being sure that the bear mauled Hill to death.

“This is always one of the hardest decisions a wildlife manager has to make and is one that we did not take lightly,” park Superintendent Cassius Cash said at the time, reported the Smoky Mountain News. “Over 2 million visitors come to the Cades Cove area annually and there are several residential areas very close to where we found Mr. Hill’s body. We could not take the risk of allowing this bear to approach or show aggression toward other people.”

The autopsy revealed that the bear had no role in Hill’s death.

“An autopsy revealed extensive postmortem animal predation, but no findings of antemortem/perimortem trauma (i.e. Mr. Hill was not attacked by a bear),” park officials said in the report, reported WATE.

A man whose body was found in the Great Smoky Mountains National Park last year died of a meth overdose before being partially eaten by a bear, an autopsy found. https://t.co/sPwP7I5G5I

There are an estimated 1,500 bears roaming the Great Smoky Mountains National Park, but few are aggressive.

“Very few bears exhibit aggressive behavior toward humans,” the report continued. “Wildlife biologists and park rangers work hard to prevent bears from becoming food-conditioned or habituated to high-use areas. Out of an abundance of caution for the park’s 11 million park visitors, park staff implement aversive-conditioning techniques and, on rare occasions, euthanize individual bears that pose a threat to visitor safety.”

Officials at Great Smoky Mountains NP reluctantly euthanized a bear after it was determined that it had scavenged the body of a man who had been poaching ginseng. The… https://t.co/y9INzGQnbq

Following Hill’s death, family members mourned the loss of a loved one.

“I can’t believe that this has happened to my son,” William Hill Sr., Hill’s father, told 10 News. “He knows exactly what to do, I trained him.”

Family members said that Hill was an avid outdoorsman who loved to spend time outside. He was also a father of three.

“He had three little babies and loved them to death,” his mother Deborah Hill said. “He loved everybody, he was really friendly and we don’t blame anybody. This is just a tragic thing that’s happened.”

She said in a later interview that she did not believe her son was killed by a bear.

“You cannot make me believe that the bear is what killed my son,” she said. “He knows too much about hunting and he knows how to get away from bears.”

Joshua David Morgan, the man who was with Hill and also looking for ginseng, died on Oct. 1, 2018, according to an obituary.

The obituary did not state a cause of death but said that Morgan was preceded in death by Hill, described as his best friend. Morgan was survived by two daughters.