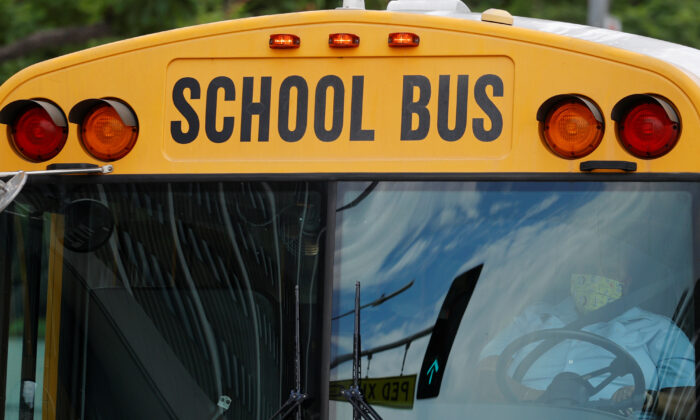 A school bus driver is seen in a caravan demanding funding from Congress for the safe reopening of schools, in Los Angeles, Calif., on Aug. 13, 2020. (Mike Blake/Reuters)
Southern California

A man fired a 9mm handgun at a moving school bus in Buena Park in an attempt to murder the bus driver, officials said.

Baxter’s wife had an active domestic violence restraining order against him.

“Baxter had a lengthy criminal history, and as a result of the latest domestic violence incident, Baxter’s parole had had been revoked. At the time of the incident, he was a parolee at large,” Weaver said.

Baxter was driving a grey Chevy Tahoe when he fired a gun at a moving school bus with a child inside the vehicle.

The shooting took place in the area of Orangethorpe Avenue and Western Avenue, which is located near multiple schools.

An officer who witnessed the shooting tried to stop the Baxter as he fled and a pursuit ensued.

Baxter raced through the city’s streets, drove through the Buena Park School District parking lot, came back out onto the city streets, and again tried to return to the school district’s parking lot, Weaver said.

When Baxter tried to drive back into the parking lot, he was obstructed by the entrance gates, which someone closed and locked.

Baxter crashed into the gate and collided into a vehicle in the parking lot. Then, he exited his vehicle.

An officer involved shooting occurred and Baxter was pronounced deceased at the scene. His firearm was located.

There were no injuries reported during the incident.

Weaver said this case is an isolated incident and there are three separate investigations occurring for this case.

Less than a week later, a Buena Park High School (BPHS) student brought a gun to school and was arrested on Sept. 8, officials said.

School staff notified the Buena Park police’s School Resource Officers (SRO) that a student had a firearm with them.

“The student attempted to flee and was safely detained after a brief struggle,” Buena Park police said in a statement.

A loaded 9 mm pistol was located in the student’s pant pocket.

The student was arrested and taken to Juvenile Hall. The identity of the suspect was not made public.