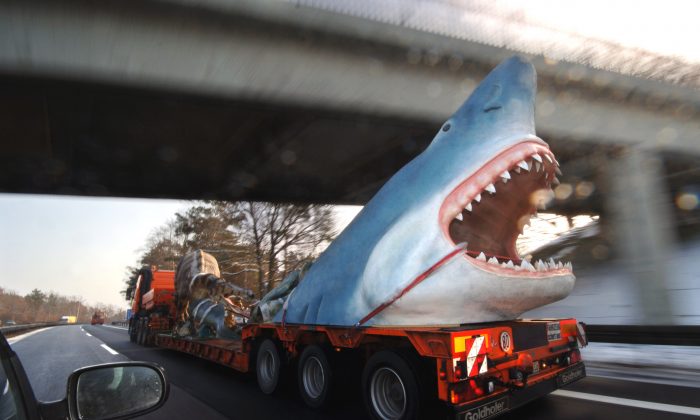 A truck in Germany transports a life-size model of a megalodon shark on March 7, 2006. (Sven Kaestner/AP Photo)
US News

A nearly 6-inch-long tooth from a millions of years old Megalodon shark was found on a beach in North Carolina.

Harvey Wall posted multiple photos of the discovery on June 28, showing one with a gray tooth and black root. It’s about 5.5 inches in length, reported the Charlotte Observer.

“Found near high tide line in a pool of water on the east end of the island,” he wrote on Facebook. “I’ll probably never find another one.”

Wall said he wasn’t looking for the ancient shark tooth, saying his family was looking for seashells walking his dogs.

“I could only see the black part (of the tooth) in low tide. I kicked it and it flipped over, exposing the whole tooth,” he told the Charlotte Observer.

Wall added that he wanted to donate the tooth to the Museum of Coastal Carolina in Ocean Isle Beach.

A number of other megalodon teeth have been found on beaches in North Carolina.

Several months ago, a North Carolina girl discovered one.

“I’m looking around and I see something buried in the sand. I uncovered it and it keeps coming, and it’s this big tooth, and then I hold it up and I’m screaming for my mom,” she told WECT, which reported on her finding.

“I was really shocked and excited for her that she found something that big,” a family member told the news outlet.

Other than the one tooth, she and her sisters found five others. But hers was the biggest.

BEACH TREASURES: Avery Fauth found a megalodon shark tooth on the beach while on spring break! Her reaction to the find tonight at five on @wectnews pic.twitter.com/RgwOnTkKZz

“I was just like, is this a dream, because I didn’t believe I found it, and then I took it out and it was one [a megalodon tooth],” Fauth added. “They’re really rare to find and they’re some pretty big teeth and they’re pretty cool.”

Fauth’s father said that he had been searching for megalodon teeth for 25 years, but he never found anything.

The girl said that planned to tell her class about the find when she returns from spring break. However, she won’t take it to school because she’s afraid someone might break it.

How Big Were They?

The prehistoric sharks were quite large in size, but according to LiveScience, they might not be as large as people think.

“Going solely by the size of the teeth, some believe that the fish could grow up to 60 feet long (18 meters), according to the Natural History Museum (NHM) in London, while others think that about 80 feet (25 m) long is more likely,” states the website.

Other scientists believe they may have been even smaller.

“Original calculations greatly overestimated the size of megalodon,” researcher Marty Becker told LiveScience. “This is in part related to the fact that the megalodon fossil record is dominated almost exclusively by teeth. Current calculations indicate that megalodon may have achieved lengths up to 10 meters [around 33 feet] and nothing like what is currently featured in the summer 2018 movie ‘The Meg.’”

The largest megalodon tooth ever found measured about 7 inches in length.

The Florida Museum states the species went extinct about 2.6 million years ago.