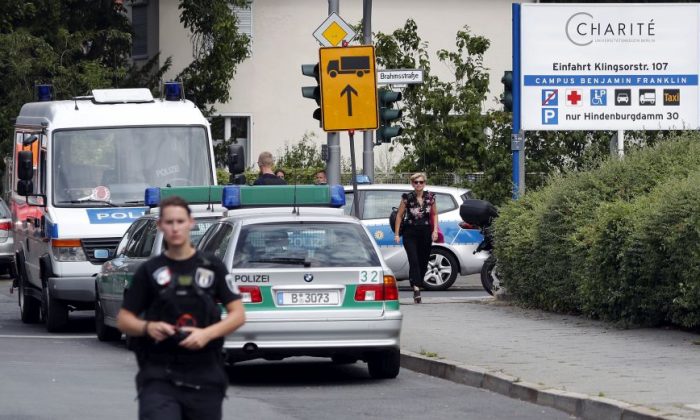 A police officer walks in front of the Benjamin-Franklin Hospital in the southwestern district of Steglitz in Berlin, Germany, Tuesday, July 26, 2016. German police say a patient has apparently shot at a doctor and killed himself at a hospital in Berlin. (AP Photo/Michael Sohn)
Europe

BERLIN  — Officials say a man has shot dead a doctor before killing himself at a Berlin hospital.

The shooting occurred around 1 p.m. Tuesday at the mouth, jaw and face surgery unit of the Benjamin-Franklin Hospital in the southwestern district of Steglitz.

Berlin police initially said the doctor had suffered life-threatening injuries, but later said he had died. The circumstances of the shooting are still being investigated.

Police said there was no indication of a “terrorist background” to the attack.

A series of attacks over the past days, including the shooting deaths of nine people and a gunman in Munich on Friday, have prompted officials to call for stricter gun laws in Germany.

“We have no indication that anyone else was injured or involved,” Berlin Police wrote on Twitter, saying the hospital is “under control.”

Syrian Man Kills Woman With Machete in Germany, Is Arrested

After the merger of Free University Berlin and Humboldt University, the Benjamin Franklin Clinic among Europe’s largest hospitals. There are four throughout Berlin.

Since July 18, this is the fifth attack that’s rocked Germany. Three of the attacks were carried out by migrants, leaving 10 people dead and injuring 34.