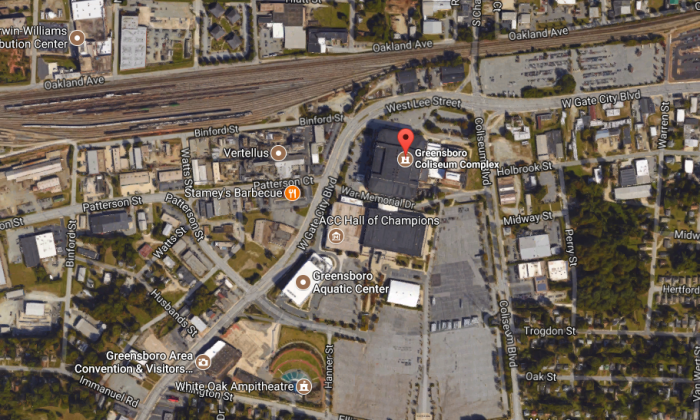 The Greensboro Coliseum Complex that held the Central Carolina Fair. (Screenshot via Google Maps)
US

Man Falls From Ferris Wheel While Trying to Save 2 Children

A worker at a North Carolina fair fell from a ferris wheel on Friday, Sept. 15, when he climbed the attraction to help two children stranded in a tilted carriage.

The operator of a ferris wheel at Central Carolina Fair in Greensboro had to stop the attraction when one of the carriages started to tilt around 9:45 p.m. on Friday.

One of the employees with Michael’s Amusements climbed up to the side of the carriage and apparently tried to move it back to proper position. When the carriage was suddenly released the employee fell from the wheel as the crowd screamed. The carriage swung wildly back and forth while the crowd watched in horror.

A woman then climbed up to the carriage to stabilize it. The wheel was then rotated to get the two boys safely on the ground.

“The injured worker was transported by Guildford County EMS to a local hospital for treatment,” Greensboro Police Department stated in a statement on Facebook.

Amazingly, the man suffered a cut to his leg but appeared to have no further injuries, said Brittney Smith, 28, of High Point, according to WAHS 11.

Smith caught the incident on camera and posted the video on Facebook. She said the boys were holding to each other.

It was a frightening moment for the mother of the boys, who could only look on as the workers attempted to rescue their children.

“I felt helpless and it was the scariest moment,” said Brenda Kindle, the mother of one of the boys, ABC News reported.

“That’s your babies up there. You can’t do anything to protect them,” said Angela Roach, mother of the other boy. “You’re at the bottom just lifeless.”

“I thought that something bad was going to happen, like one of us was going to pass,” said one of the boys. “I know I’m going to do no more rides at the fair unless if it’s a bumper car. That’s the only thing I might do.”

The fair officials said the ferris wheel operator correctly followed safety procedures. The carriage was restored to “proper working condition” and the attraction was cleared by state officials to continue to operate on Sept. 17.