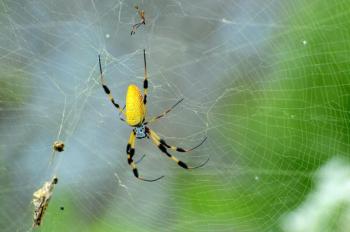 Damian Robin
View profile
Follow
biggersmaller
Print
A 28 year-old suffered severe burns after attacking a spider with an aerosol can at his home in Essex, U.K.

Summoned by his wife to deal with the spider on Bank Holiday Monday, the man tried to kill it by spraying it with the aerosol.

He could not tell if it was dead because the bathroom light had blown. So he flicked a cigarette lighter to see, but ignited the gas fumes and caused an explosion, The Daily Telegraph reported.

The blast blew him off his feet and lifted the loft door off its hinges.

"It appears the wife had spotted the creepy crawly in the bathroom and asked her husband to capture it," said a spokesman for Essex Fire Department.

The man suffered flash burns to his head, legs and torso and was rushed by ambulance to the hospital after dousing himself in cold water.